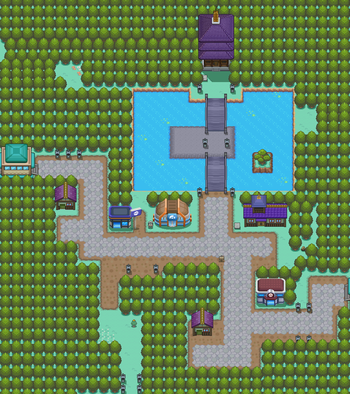 If you talk to the man standing between the Gym and the Mart, and answer "No" to the question he asks you, he will lead you down to his Pokémon Academy to study up on Pokémon types and conditions. In this schoolhouse, he teaches his students some basic Pokémon battling and raising lessons. You can also learn a lot from the writing on the blackboard and the other students. The man to the farthest right of the room will offer you to create a group for your friends to join. This is covered fully in the WiFi section. 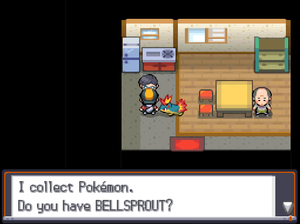 You can catch an Onix later, but you'll never get as much use out of one as you will now versus Falkner and his Junior Trainers. Visit the house southwest of the Pokémon Center with an extra Bellsprout in order to trade it for it. If you're looking for a Bellsprout, you can find one on Route 32. As a traded Pokémon, your Onix will gain levels more quickly than a wild one, but you're stuck with the nickname the trainer gave it. Like all trades with computer characters, its starting level will be the same as that of the Pokémon you traded for it.

Get the Pokemon Daisuki Club Eggs from Primo[edit]

You can collect three Pokémon eggs and unlock some box wallpapers by speaking to Primo, the man standing next to the PC in the Pokémon Center. They are awarded for giving him the correct phrases, the website that gave these away to players is no longer online, but there are online calculators that can determine the winning phrases from your trainer id. The eggs contain Slugma, Mareep, and Wooper. Slugma is particularly useful because it learns ember at level 8 and its magma armor ability causes eggs to hatch in half as many steps while you have it in your party. 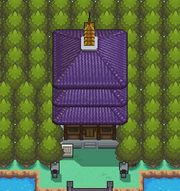 What a tall tower.

After you've replenished your goods at the Poké Mart, stopped by the Pokémon Academy, and traded for an Onix, if you wanted to, head east from the Poké Mart and head north at the bridge to reach the tower. This is a good place to train your Pokémon before the Gym, and its completion is mandatory in order to proceed. It's recommended that you take a detour to Route 32 before you head into the tower to catch a Mareep for training. Mareep's electrical attacks will make the flying-types of the gym trainers even easier.

The tower is fairly easy if you arrive during the morning or day, since the only random encounters you'll have to deal with are Rattatas. At night, Gastly join in the fun, and their immunity to Normal-type attacks can be a problem if you don't have a Pokémon with a different type of attack, like Bellsprout's Vine Whip or Onix's Rock Throw. Take this opportunity to catch one as they're great to use for catching other Pokémon, it can put wild Pokémon to sleep with Hypnosis, keep them from escaping with Mean Look, and whittle down their health with Nightshade. 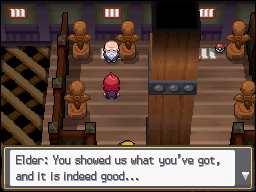 Virtually all of the trainers are packing Bellsprouts. If you chose Cyndaquil as your starter, you'll have no problem burning through them. Other players will want to use a good Flyer. Crystal players can pick up a Spearow from Route 46, which starts with Flying-type Peck, and Hoothoot can learn it at level 11. Pidgey's Gust, which it learns at level 9, is equally effective.

The third floor has several monks and their leader, the Elder. You will see your Rival briefly, but he leaves quickly. He thinks the Elder is weak. Defeating the Elder will get you TM70 Flash which will help you see inside dark caves. But the Sage is tough, while your Flying or Fire-type Pokémon can shred his Bellsprouts, and the Bellsprouts of all his underlings, you'll need an Onix or Geodude to deal with his vicious level 10 Hoothoot. There is an Escape Rope at the top right corner of the room, which can be used as a quick escape from dungeons, including the Sprout Tower. 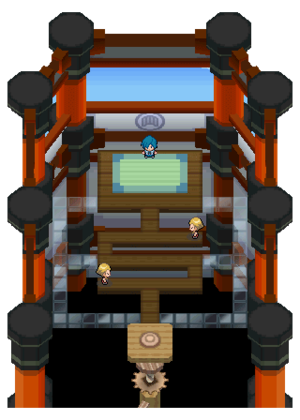 After you've completed the Sprout Tower, the man that was blocking the elevator in the Gym will allow you to pass. 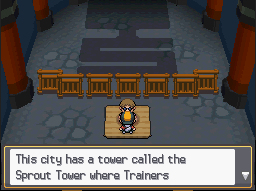 It's your first Gym battle, so be careful. There are two Gym Members and one Gym Leader for you to fight, but you don't have to fight them without a break. If your Pokémon get too weak, take them to the Pokémon Center and heal them between battles, so they're able to continue. If you went and caught a Mareep and raised it to level 10, it will have the move Thundershock which make this gym much easier; another viable option is having Rock Throw by rasing the traded Onix to level 9 or a Geodude from Dark Cave to level 11. as this gym doesn't have any other exploitable weaknesses this early in the game. If you don't have acess to Thundershock or Rock Throw, then battle normally and watch out for Pidgeotto's Roost; it will heal Pidgeotto for half its health while sacrificing it's Flying typing for the turn (making it pure Normal typed for a short while). Swap in a strong Pokémon that can finish this flyer quickly, but watch out its Gust.

After taking care of Falkner, you'll be awarded TM51 Roost along with the Zephyr Badge. This is your first step towards the Pokémon league. Badges typically do two things, make Pokémon of higher levels obey you that were obtained through trades and allow you to use new HMs outside of battle. Your first one doesn't fail to deliver. With this badge, Pokémon traded to you up to level 20 will obey you, and you can now use HM06 Rocksmash once you obtain it.

After you beat the Violet City Gym Leader, you'll get a surprise phone call from Professor Elm. He'll direct you to speak with his assistant at the Violet City Poké Mart, who will give you the Mystery Egg that you delivered to Elm earlier. It needs to be near active Pokémon to hatch. Keep this egg in your party as you continue your quest, and after a certain amount of steps, it will hatch. This egg will hatch into the Pokémon Togepi. Togepi is a normal type Pokémon that can't be caught anywhere. It evolves into Togetic when it's happy enough, so make sure you use it often, keep it in your party's lead spot, get it massages, and other happiness raising actions. Togetic has a new evolution in this version, Togekiss, that increases Togepi's usefulness compared to Pokémon Gold and Silver. 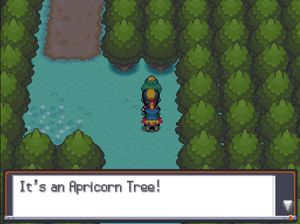 It's an Apricorn Tree!

You'll also want to head over to Route 36, west of Violet City, and pick up HM06 Rocksmash from the man near the sign. Rocksmash will allow you to go to new areas you couldn't before. The two items that become available in Violet City are a yellow shard, which can then be traded for berries with the man near the Pokécenter, and a Hyper Potion.

The Poké Mart will also have several new items for sale, so be sure to stop by and stock up before you head out. Your next target is the Hive Badge, which can be found in Azalea with the bug-type trainer, Bugsy. If you head west out of Violet City you'll reach the Ruins of Alph which are optional, but yield some interesting sidequest content. If you're not interested, head south through Route 32 to get on your way, and make sure to take a mental note of the Apricorn Tree near Route 32's entrance.