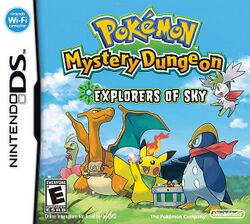 As with its predecessors, the game follows the story of a human who is mysteriously transformed into a Pokémon (determined by a personality test at the game's start-up). There were extra dungeons added, the titular event Pokémon Shaymin featured on the box was added, and alternate forms introduced in Pokémon Platinum (except for Rotom) were included.

Explorers of Sky expands on the plot of Explorers of Time and Explorers of Darkness, as well as exploring the background of several characters. New cut scenes were added and some were changed. Five new so-called Special Episodes are unlocked at certain points in the game which add to the overall game.