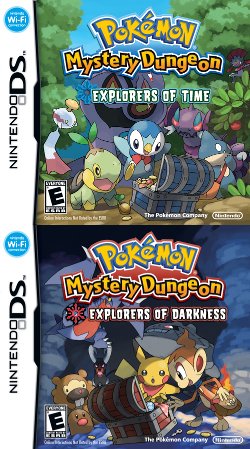 In the future, time has frozen. The wind never blows. Morning never comes. Winter or summer never comes. So two heroes decide to take a stand. Those heroes, are Grovyle and his trusted human partner (you). With the help of Celebi, they return to the past, to collect the Time Gears, and stop the destruction of Temporal Tower.

One stormy night, a human transformed into a Pokémon (you) found his way onto the coast of Treasure Town in the world of Pokémon. He had lost his memory and remembers only his name (which you will provide later) and the fact that he was a human. Along with his partner (which you've chosen right after the personality test you took), they form an exploration team to have wonderful adventures and explore unknown places. What they don't realize though, is that this is the first step onto the most amazing adventure the world has ever known. An adventure which spans time.... and darkness.