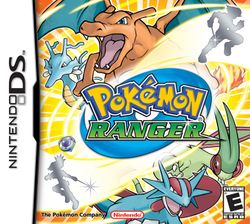 Pokémon Ranger is a game for the Nintendo DS. It is the first in a series of 3 games, and was released in 2006 (2007 for Europe), being one of the DS's launch titles.

Pokémon Ranger revolves around the player, who has had dreams of becoming a Pokémon Ranger for a long time, until one day they receive a letter telling them that they've been recognized and accepted as a Ranger in the Fiore region. By cruise, you arrive at Fall City and are ready to begin your adventure as a Ranger, helping people and Pokémon alike.

The game introduces a totally new way of capturing and utilizing Pokémon than the traditional Pokémon RPG. Instead of catching a Pokémon with a Poké Ball, you capture a Pokémon using a device called the Capture Styler. Once the Pokémon is caught, you can utilize it in battle to capture another Pokémon using Poké Assists or use the Pokémon's Field Move to help you progress, if it has any. Once you have used a Pokémon, it is then released harmlessly back into the wild.

This game is part of the 3rd generation of Pokémon, however not all Pokémon from the first three generations are available in it.