Pallet Town might seem like any other humble hamlet, but someday the whole world will know that this was where you began your quest to become the greatest Pokémon trainer ever! The famous Professor Oak, known for his Pokémon studies, also lives in Pallet Town. He'll give you your very first Pokémon. That's one down, 150 to go! 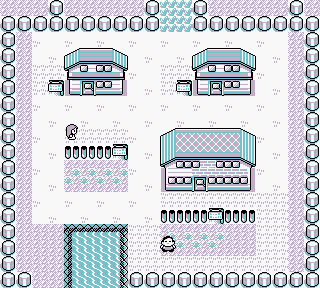 Home, sweet home
Grab a Potion out of the computer in your room just in case your rival puts up a good fight. If your Pokémon get hurt, Mom will heal 'em for free.

This is where it all begins, Pallet Town, home to you and your mom, your rival and his sister, and the Pallet Town Pokémon Research Lab. The head of this research lab is none other than the world renowned Professor Oak, who happens to be your rival's grandfather. But don't worry, he doesn't play favorites. In fact, he will give you first choice in Pokémon when the time comes.

This day may start out like any other, but this is a special day for you. This is the day that you get to embark on your own Pokémon adventure. You'll travel the world, see lots of interesting places, and meet lots of interesting people. But most of all, you will set out to become one of the greatest Pokémon trainers the world has ever known. After saying good morning to your mom, you step out the door to find the one man who can start you on your journey: Professor Oak.

Professor Oak catches you in the grass.

You start off your task by looking in the obvious place: the research lab. But oddly enough, he isn't there. So you check your rival's home, but you only find his sister. Professor Oak seems to have left town. Maybe you should head out in search of him. The moment that you set one foot outside of town, someone calls to you and warns you not to go. It's Professor Oak! In Red and Blue, he just brings you to his lab. However, in the Yellow Version, a wild Pikachu appears. Luckily, Oak catches the electric mouse.

Professor Oak brings you back to the lab with your rival waiting. He will offer the both of you a starter Pokémon. In Pokémon Red and Blue versions, he offers you the choice of three Pokémon from which you will select your very first. Choose carefully: not only will the Pokémon you pick be your strongest for the next few hours, it will determine which Pokémon your rival picks as well. In the Yellow version, your rival is given an Eevee that you were supposed to pick until he snatches it right from you. As an alternative, Professor Oak gives you the Pikachu he has just caught as your starter instead.

Your rival took the Eevee right from you.
Blue's house
Your lifelong rival isn't home, but his sister is. Your rival carries a grudge against you, but his sister thinks you're OK. If you stop by a little later, she'll give you a useful item, no matter what your rival says.

With your first Pokémon in hand, and an eagerness to start your journey, you head for the exit. But before you can leave, your rival decides that he wants to test his mettle against you and challenges you to a battle that you cannot refuse.

Your first battle is seemly difficult. People playing Red or Blue will have a tough match ahead of them, since your rival has shrewdly chosen the Pokémon that has an type advantage over yours (although it doesn't know any moves of its own type yet), however, he might have the better stats to defeat you such as Charmander having better speed over Bulbasaur or Squirtle using its superior defense to take in Charmander's hits. In Yellow, this one can be luck based. While Pikachu has a poor defense which lets it get hit harder by Eevee, Pikachu also has the higher speed, thus allowing it to get a critical hit more often. Fortunately, your rival isn't much of a fighter, and wastes time with status-based techniques like Growl and Tail Whip instead of just choosing the attacks and going for the quick K.O. Using a status-based technique is fine at the beginning of the battle, but is usually a bad idea afterwards. In case if your rival is hitting hard, you can also use that Potion if you need to.

If you lose, though, no big deal: All you miss out on is your rival's

175 and a bit of EXP which will level up your starter to level 6. And you'll get plenty of opportunities for a rematch. Also, in the Yellow Version, your Pikachu pops out of its Pokéball and Oak says that keeping your Pikachu out of its Pokéball would make it happy. If you want to talk to Pikachu, it will show you its current mood (at first it doesn't really seem used to you but your relationship will grow better later depending if you treat Pikachu well).

After the fight, you're ready to leave town and travel along Route #1.