After you defeat Misty, you should head north from Cerulean City. Your rival, who now has four Pokémon, blocks the bridge. So do six other trainers. If you can defeat them all, you'll receive a valuable Nugget and the freedom to travel to the end of this path, where you can meet the world's greatest Pokémon enthusiast, Bill the Pokémaniac! 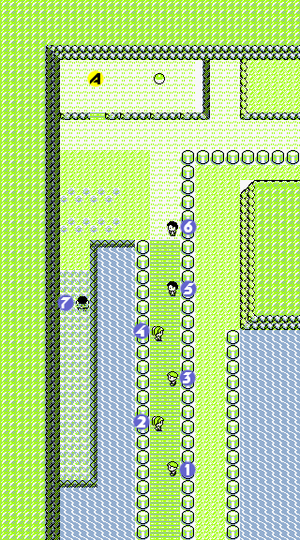 Once you've beaten your rival, you can cross Nugget Bridge by beating the six Jr. Trainers blocking your progress, they will each challenge you to a battle. When you've defeated them all, they will let you pass.

On the other side, Yellow players will find a man (at the yellow A) who wants to give a Charmander a good home (such as your team), while Blue and Red players will only find TM45, which teaches Thunder Wave. It's a great paralysis inflicting move with perfect accuracy.

Defeat your rival once more!

You'll meet a familiar foe at the beginning of Nugget Bridge. Your rival is back, and this time he's actually improved enough to pose a small threat.

Your original party will work fine against your rival (Pikachu, your starter in its second evolution, and Spearow). Make sure they are all Level 16 or above. Lead with Pikachu and zap Pidgeotto out of the sky; 1-2 Thundershocks will do the trick once again. Use your lowest-level Pokémon (that you actually want to train) against Abra: it can't do anything to your Pokémon at all, so it's basically free EXP. Rattata is hard; its STAB Quick Attack and Hyper Fang can cause problems if allowed to go unchecked. Use your strongest Pokémon available on Rattata. Finally, use Spearow's Peck against Bulbasaur, Pikachu's Thunder Wave and Quick Attack on Charmander (Thundershock gets a little more power with STAB, but Quick Attack runs off of Pikachu's higher Attack stat and hits Charmander's lower Defense stat), and Pikachu's Thundershock against Squirtle.

You can use the same party of Spearow/Pikachu/Mankey that you used previously and be victorious, but it's easier if you make another acquisition. Get Bulbasaur from Cerulean City, train it on Route 4 to Level 13 to have it learn Vine Whip, and prepare for a sweep. Pikachu leads against Spearow and Thundershocks it into oblivion. Use Bulbasaur and its Vine Whip against Sandshrew, and use Mankey against Rattata. Just make sure you're using Low Kick and not Karate Chop. Eevee will fall to Low Kick as well. Spearow is your backup: if a Pokémon (maybe Mankey; frail defensively and two enemies to defeat) falls, use the bird.

The best item to get here is TM19 on Route 25. There's a tree blocking it again but there is a way in getting it earlier. You'll need to be crafty to get it: be at least three squares below the Jr. Trainer (#7 on the map) who's blocking it when you cross his line of vision, and he'll abandon his post to come fight you. Immediately after, loop behind him and grab it. If you weren't able to succeed, you can always come back later to the spot to have a Pokémon cut down a tree blocking the area. TM19 holds Seismic Toss, a Fighting-type move that does damage equal to the level of the Pokémon using it to an enemy regardless of their type or Defense. It can also hit Ghost-type Pokémon, which are usually unaffected by Fighting-type attacks.

You'll find an Ether if you look one space East of the Lass (#9 on the map.)

You'll also find an Elixir if you examine the wall in the space above the first hiker (walk 2 squares east and 2 squares north of trainer #1 on the map).

Bill has a problem. Help him out by going to his PC's keyboard and doing what he asks. Yellow players can enjoy some amusing Pikachu antics as well.

Once he's rewarded you with an S.S. Ticket, exit the cottage and enter again. Check Bill's PC once again for information on four rare Pokémon. When you're done, take the shortcut (go south from the cottage) back to Cerulean City (or for a faster way if playing on Red or Blue, use an Escape Rope inside Bill's house back to the Cerulean City Pokémon Center if it was the last place you healed) and go to the house that's guarded by a cop. Head on through it and fight the Team Rocket burglar (his roster is in the table to the left). Knock him out and recover TM28, containing Dig. Dig is a decent Ground-type attack that can be learned by Sandshrew, Geodude, and even non-Ground Pokémon like Squirtle, Charmander, Rattata, and a couple of others. In battles, it does a ton of damage with a 100 power base, though it's unfortunately delayed by a turn, during which point you're invulnerable but this gives a opponent a free turn to do what he/she pleases such as switching out Pokémon (most likely a Pokémon that can resist Ground-type moves) and using stats boosts. However, when used outside of battles, you can use it to escape from dungeons (oddly, even some buildings allows Dig to be used)!

While in town, you can sell your Nugget for

5,000 (that's all it's good for) and then cut through the burgled house's yard and head around Cerulean City to the south. You've got a ship to catch.