Using Cut, chop your way to Route #9 from Cerulean City. Check into the Pokémon Center near the entrance to the Rock Tunnel in the North end of Route #10, then plunge into the underground passage. It emerges on the South end of Route #10, a very short route to your next destination, Lavender Town. This might seem like a roundabout way to get there — but it's the only way.

Route #9: before the Rock Tunnel[edit]

The trainers here are abundant, but many of them can be avoided (only need to battle two), and there's a Pokémon Center at the end, in Route #10, before you go into Rock Tunnel (A on the map). Make sure you teach Cut (as HM01) to a Pokémon that is able to learn it.

Above Trainer #1 on Route #9 is a ledge with a tree on the right side. You'll have to go around to reach the tree, but examining it will net you an Ether.

To the left of Trainer #2, there is TM30. The TM contains Teleport, which allows you to escape from wild Pokémon battles; the move always fails to work in trainer battles. It can also be used outside of battle, where you can warp to the last place you healed (which can be a Pokémon Center or the player's house).

Before you enter the tunnel, hack aside the top bush and search the rock face above it for a Super Potion.

The Power Plant is visible from Route 10, but you can't reach it just yet. Sometime later, you'll obtain a Hidden Machine that will enable you to use the Surf technique. You'll then be able to travel along the stream that flows past both Route 10 and the Power Plant. Until then, you'll just have to keep your curiosity in check. 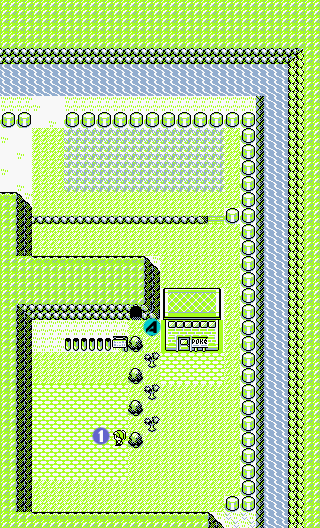