The Viridian Forest is smack-dab in the middle of Route #2, the route that runs between Viridian City and Pewter City. Pokémon are plentiful within its borders, and many trainers come here to capture new specimens for their collections and to challenge other trainers. It's easy to lose yourself in Viridian Forest if you don't know where you're going, so be careful! 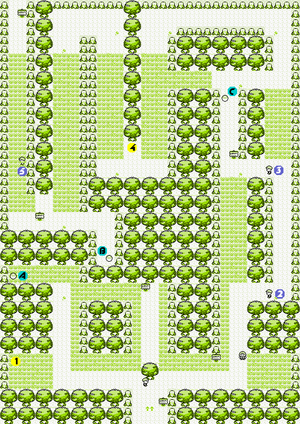 Battles with Trainers
You'll find rival trainers everywhere you go, and they'll usually challenge you as soon as they see you. Trainers can have up to six Pokémon, and you can't Run from a battle with a trainer, so always be prepared for an extended battle. Keep in mind that the Pokémon that trainers use are often more powerful than the wild Pokémon found in the surrounding area.

Viridian Forest serves as your first "dungeon" stage. It's hard to get lost here, but first timers may wish to explore it slowly to get a feel for the layout. As you cross Viridian Forest, you'll be attacked by wild Pokémon and challenged by other trainers. While encounters with wild Pokémon are random, trainers will only come at you when you cross their line of vision, so you have a degree of control over when they challenge you. Unfortunately, they are usually placed in positions that give you no choice but to pass in front of them, although a few can be avoided by walking around them. However, the behavior where trainers can't change the direction they are looking at is only this way in Generation I games.

If you are having trouble defeating trainers in a given area, it probably means that your Pokémon aren't strong enough and need to be leveled up more. The highest level Pokémon that a trainer in Viridian Forest has is a level 9 Weedle in Red and Blue and a level 10 Caterpie in Yellow, so as long as most of your Pokémon are level 8 or above, you should be in good shape. If you caught Spearow and Nidoran♀ or Nidoran♂ on Route 22, you're golden - Nidoran's Poison-type means you can soak up Poison Stings from Weedle, and Spearow's Peck has a type advantage against Bug-types.

The Pokémon that you encounter in the forest may seem tough, but most of them won't be. Wild and trained Kakuna and Metapod can't attack, only using Harden to raise their Defense (which can make for some long battles that wear down your Pokémon's PP, so be careful). These two also give lots of experience when defeated, so use your weakest Pokémon when fighting them. Never try to capture a wild Metapod or Kakuna. Instead, capture Weedle and Caterpie and level them up so that they evolve into Kakunas and Metapods while retaining their old moves. They evolve fast: both will be at their third stage of evolution by Level 10! Definitely capture a Caterpie and raise it to Butterfree, especially if you chose Charmander as your starter.

Pikachu are extremely rare in Red and Blue (and non-existent in Yellow, since you already have the one and only as your starter) and will take extensive periods of walking around through grass to find them. It isn't necessary to capture one, but they can deal with Flying-types and Water-types with ease, and it'll be awhile before you can catch another Electric-type Pokémon. While they are at first very low leveled with awful stats, it becomes a great fighter when it evolves into the much stronger Raichu. Pikachu can be found throughout Viridian forest.

As you enter the forest, take the path on the left side of the large tree ahead to find a hidden Antidote in the big tree (which you could need against the trainer at the end of Viridian Forest with his Weedle's Poison Sting having a chance of poisoning your Pokémon in the Red and Blue versions), and directly in front of Trainer #5 is a hidden Potion.