Pokémon Ruby and Sapphire/Capturing the Regis

You can capture the three Legendary Pokémon Regirock, Regice and Registeel in one great adventure.

Start Surfing west of Pacifidlog Town; you will notice some strong currents that carry you to Slateport City. Enter these currents from their southern border. You might have to travel two or three times before you notice and finally reach the only dive spot in this route. Dive into it and swim southward; you will notice an inscription in Braille. It says Go up here. So, resurface at that spot to enter the Sealed Chamber, which is divided in two chambers. 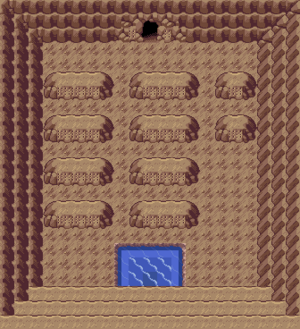 Inside, is a cave that has all ABCDEF... written in Braille again. The northernmost inscription reads Dig here. Use a Pokémon that knows the move Dig and a door will open leading to the Inner Chamber. 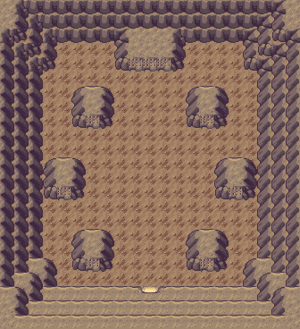 Here is a long message written in this chamber: 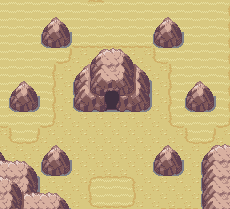 As you might have noticed before on passing inspection, all the chambers have rocks encircling them. This symbolizes the braille "eyes" of each Regi. The Desert Ruins are obviously located in the desert near Route 111. Regirock is located here. While these chambers have been closed tight before, entrances have been revealed. Step inside to further investigate the ruins.

At first glance, you might think you've been duped into visiting an empty room, but don't be discouraged. In reality, you've only scratched the surface to finding Regirock. Another braille message has been inscribed on the wall directly at the end of the room, which has a clue to opening the final door to the golem. The sign reads, in Ruby and Sapphire: "Right, right, down, down. Then, use Strength." In Emerald, it reads: "Left, left, down, down. Then, use Rock Smash." Peculiar isn't it? In order to open the door to Regirock in Ruby and Sapphire, go right two spaces, down two spaces, then use the HM move Strength. In Emerald, move left, left, down, down, and then use Rock Smash.

Suddenly, you'll hear a whooshing click, and a hole will open up to another room! Inside here, you'll finally be face-to-face with one of the Pokemon alluded to all this time: Regirock. 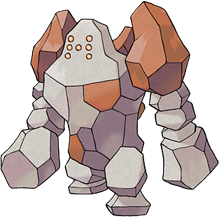 It's time to start capturing the Legendary Golems! Begin this adventure by facing Regirock, the Rock Peak Pokémon! Prepare for an awesome battle!

Battling Regirock won't be so difficult if you know what to do, you'll notice this Pokémon is at level 40 and that it knows Rock Throw, Curse, Superpower and Ancient Power. Water, Grass, Ground and Steel moves have a great advantage over it. If you chose Mudkip or Treecko as your starter, it'll be easy to lower Regirock's HP, but don't worry, Fighting moves are also super effective against the Regis. Just remember not to use Fire or Flying Pokémon, as their moves are useless against Regirock. When you're done, throw lots of Ultra Balls and, after a while, you'll eventually catch Regirock! If you end up passing 10 turns (which you most likely will), using Timer Balls would be more affordable and effective than Ultra Balls. Remember, Timer Balls can be bought in Rustboro City. Good job, that's one down, two more to go! 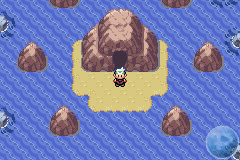 The most tedious golem to catch, Regice, appears at the Island Cave on Route 105, up a little ways from Dewford. On the far western side of the route, it dovetails into a small path with a few islands, where the Island Cave awaits at the end, except now, the inside of the cave is open wide for exploring.

Once you enter the chamber, the first thing you'll probably identify is Braille written on the walls again. Here in Ruby and Sapphire, the Braille reads, "Stop and wait. Wait for time to pass twice." In order to open the door to Regice, leave the Braille message open for 2 minutes. It's as simple as that. In Emerald, the Braille reads: "Stay close to the wall. Run around one lap." So do that; walk the perimeter of the room once. The door will open.

After two minutes' elapse in Ruby and Sapphire, the Braille message will automatically close, and the sealed entrance to Regice will open; and so will it open in Emerald after you've done your walking! Step inside its chamber to find the Pokemon slumbering in the middle of the room. Provoke it by trying to speak to it. At the sound of your voice, the Iceberg Pokemon will spring to life, and you'll face off against a tenacious level 40 Regice. 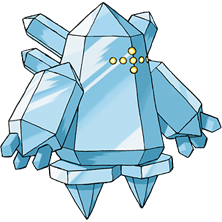 Now, you must capture the Iceberg Pokemon, Regice! Be on guard for a roughneck battle once more!

Like its brethren, Regice knows a different move in addition to the three they share: Icy Wind, a chilling blast of subzero air that lowers a Pokemon's speed as its limbs grow stiff from the biting cold. You'll also be dealing with Curse, Superpower, and Ancient Power a second time.

Regice, along with the other Legendary Golems, has a crippling weakness against Fighting types. By now, you should have a suitable contender, such as Hariyama or Machamp. Steel, Fire, and Rock will also deal double damage. When you've shaved it's HP down to a tiny speck, and possibly inflicted a status ailment mentioned previously, you're ready to capture it. Curiously, Luxury Balls are fairly effective at getting Regice, but you can always fall back on the Timer Ball if you're stuck waiting through a slew of turns. If you luck out, you'll be the proud owner of Regice! That's two down, one to go to round out your trio! 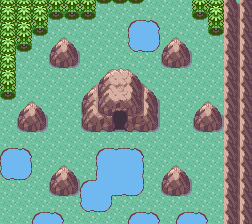 Located in the south of Route 120. Sort of like the Desert Ruins, the Ancient Tomb has a hiker (but not a trainer) looking for ruins. Even after you open the door, he is still looking! Well anyway, Registeel is here.

Afterwards, a door will appear which leads to Registeel! 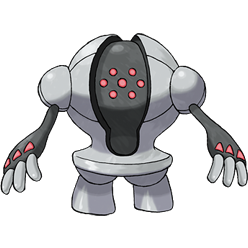 Finally, you will have to battle Registeel! Are you ready to face the brave Iron Pokémon?

In addition to being as hard as steel, Registeel is also one of the "hardest" Legendary Golems to catch. It knows Metal Claw, an overwhelming Steel move that may up its attack, too. Even though Registeel is really weak against Fighting, Fire, and Ground moves, you'll be in a big trouble if it continuously uses Metal Claw followed by Curse or Ancient Power because he can awesomely increase his Attack and Defense. So, in order to catch it quickly, you'll need to shorten its HP as soon as possible. Try to buy plenty of Ultra Balls before you face him, Timer Balls might also be useful. After dozens of tries, you will capture Registeel! Congratulations, your trio is now complete! You have successfully caught the 3 Legendary Golems of Hoenn!

You may use the guide below in translating the Visual Braille. 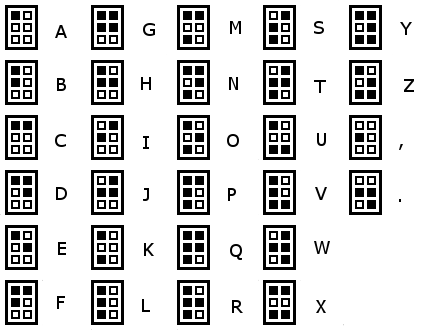