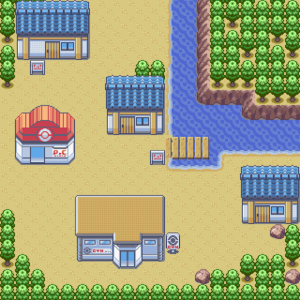 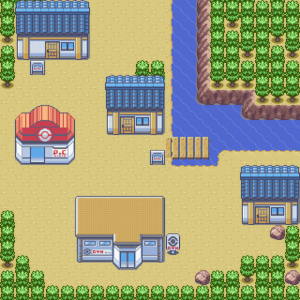 Dewford is a small seaside town on a small island accessible only through two water routes. Before getting Surf, you can only go here by asking Mr. Briney to take you here on his boat. Just north of Dewford is Granite Cave. This town doesn't have a Pokémart, so you'll want to stock up on items before you come here.

Despite the size of Dewford Town, there are a couple of things to do.

Dewford Hall is the center of Dewford Town's community. If someone says something "trendy" here, it quickly spreads around the rest of Hoenn. The player can influence what this trend is by talking to the boy outside the Hall. The trend affects where Feebas appears on Route 119, so there is actual use in changing it. Additionally, if the player returns after collecting the Balance Badge from Petalburg Gym, then a man inside will give them TM36 (Sludge Bomb).

In the house nearest the dock, there is a man obsessed with fashion. Talking to him will result in the player gaining the Silk Scarf , which increases the power of Normal type moves.

In between the southwest house and the Gym, there is a fisherman. Talking to him will result in the fisherman giving the player the Old Rod , which allows them to fish from any water source in Hoenn, and find new Pokémon!

When you enter this gym, it will be pitch black. As you beat more of the trainers in this gym, the illuminated area around you will expand.

This Gym's speciality is Fighting Pokémon. It's weak to Psychic and Flying moves, though some trainers have a Meditite to negate this weakness. Any Flying type or Psychic type would do. Ghost type's immunity to fighting moves may also serve you well, and you can pick up a Sableye just ahead in Granite Cave. Avoid Normal, Rock and Dark types. If you have a Combusken, it would have learned the Flying move Peck before evolving; this move will be useful here. Surprisingly, both of Wurmple's final evolutions are effective here, as they are Bug type which resist fighting moves while they both learn Gust, a Flying Type move, at level 13, which is the ideal level to challenge this gym. 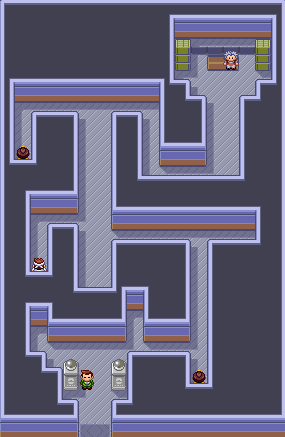 The layout in Ruby and Sapphire. 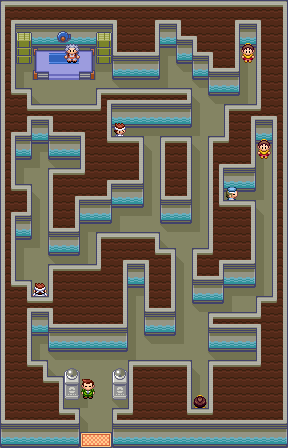 The layout in Emerald.

Brawly in Ruby and Sapphire[edit]

Most of the danger you'll face from Brawly is from one move: TM39 (Bulk Up). It raises the DEF and ATK stats of its user by one level, which, combined with his Pokémon's naturally high ATK stats and high-power physical moves (for example, Arm Thrust), can easily make it so that he OHKOs you. Luckily, like the rest of the gym, his Pokémon are weak to psychic and flying type moves, so catching Pokémon like Abra, Ralts, or Taillow beforehand should make the battle easy.

In Emerald, Brawly gains a third Pokémon to his team in the form of Meditite. It's Fighting and Psychic type, so the best way to defeat it is with a Flying or Ghost type move.

Defeat Brawly and he'll award you with the Knuckle Badge, which makes any Pokémon up to level 30 obey you and lets you use HM05 outside of battle. You also get TM08 Bulk Up, which is a great move to teach to physically oriented Pokémon such as Fighting and Flying types.

Once you're done with the gym, there's not much else to do but head out to Granite Cave to deliver the letter to Steven if you haven't done so. If you did, talk to Mr. Briney to go to your next destination: Slateport City.