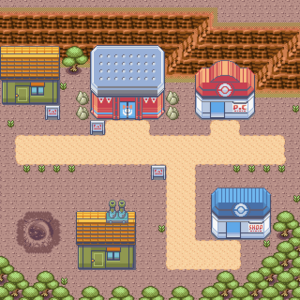 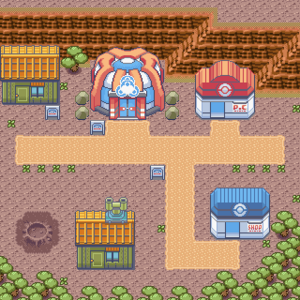 Fallarbor Town is a small settlement in the Northwest of Hoenn. Thanks to the perpetually active Mt. Chimney, the only plants that grow here are a bunch of trees and a few weeds. As for buildings, there's more to do here than you may think.

In the eastern portion of the town, you can find the PokéMart and the Pokémon Center. Inside the Pokémon Center specifically, you can find a lady called Lanette using the PC next to the desk. Talking to her will reveal that she is the inventor of the Hoenn Pokémon Storage system, and will encourage you to continue using it, before scurrying back to her home. In Pokémon Emerald only, there is also a Move Tutor in here who will teach any compatible Pokémon the move Metronome one time only.

There is also a Contest Hall (Ruby/Sapphire)/Battle Tent (Emerald) next to the Pokémon Center, which requires you to have a Normal rank to compete in.

The house to the left of both of those is home to the Move Reminder, who can teach your Pokémon any move that is in it's natural moveset at its current level, along with a few hidden moves that Pokémon can't learn by level up. However, he requires a Heart Scale to learn a single move, so you won't be able to do anything with him until you gain access to the Water routes in the East of Hoenn.

The house next to the PokéMart (the one with the chimney on top) is Professor Cozmo's house. He doesn't seem to be home, however. Maybe he's studying the nearby Meteor Falls?