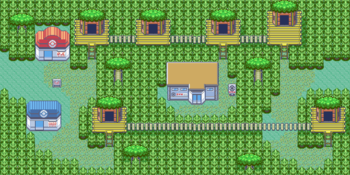 A lush jungle city, almost every building in Fortree are treehouses, with the exception of the Gym and the Pokémon Center and PokéMart. There's a decent chunk of activities to do here, but the only mandatory one for main story progress is the Gym.

In one of the houses, there is a woman who will give the player TM10 Hidden Power if the player guesses which hand she's holding a coin in three times. (The correct answers are Left Left Right). In Pokémon Emerald only, there is also an old man who will teach a compatible Pokémon the move Sleep Talk. This is a single-time event, so choose who you want to teach it to carefully!

There is a boy in one of the houses, who is willing to trade Pokémon with you. The Pokémon he wants and will exchange are different in Ruby & Sapphire compared to Emerald, so they'll be listed here:

In the south-eastern corner of Fortree is a furniture shop, that sells items to decorate your secret base with. There's two counters inside; the one on the left sells desk s and the one on the right sells chair s.

When you try to access Fortree Gym for the first time, you'll quickly realise that you can't walk down into the Gym's clearing. Fear not, for this isn't a glitch, but instead a barrier that will be revealed upon collecting the Devon Scope on Route 120. The guide continues there, so come back to this page upon collecting it. 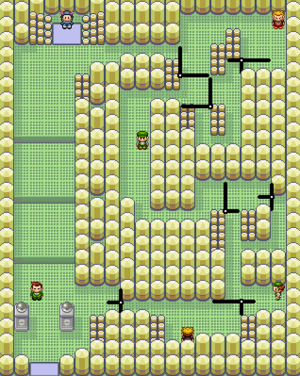 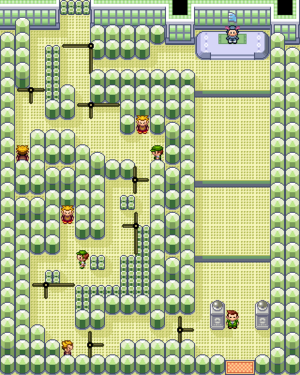 While Fortree Gym's trainers use Flying type Pokémon, the building itself is instead a collection of turnstile puzzles. Each turnstile has a certain pattern needed to get past it, and trainers are strategically placed so that you have to battle almost all of them. Your best bets for the regular trainers are to use Electric or Rock type attacks.

Winona in Ruby and Sapphire[edit]

Winona is scary, for pretty much one single reason. But before we get to that, let's look at her other Pokémon first.

Swellow is level 31, Normal/Flying type, and holds the ability Guts (Attack is increased by 50% if the ability holder is afflicted with a status condition). As for moves, Swellow has Quick Attack, Aerial Ace, Double Team, and Endeavor. You won't outspeed it unless you also have a high-speed Pokémon like Manectric. However, it's highly likely that it'll use Double Team right off the bat, so you should have time to charge up a two-turn move and one-shot it.

Pelipper is level 30, Water/Flying type, and holds the ability Keen Eye (Any accuracy-reducing move does not affect it). For moves, it has Water Gun, Supersonic, Protect, and Aerial Ace. It'll probably spam Supersonic and Protect for most of the time it's out to make you waste your moves and damage yourself, throwing in a random Water Gun or Aerial Ace to do STAB damage. Though it has one glaring weakness: It is 4x weak to Electric, so pretty much any Electric attacking move on an Electric type Pokémon will delete it... if it gets hit. 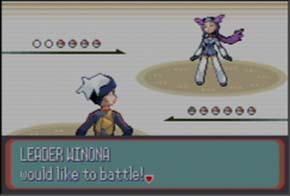 Skarmory is level 32, Steel/Flying type, and also has the ability Keen Eye. Its moves are Sand-Attack, Fury Attack, Steel Wing, and Aerial Ace. Sand-Attack will be an annoyance, as it reduces your accuracy, and Steel Wing and Aerial Ace benefit from STAB, so Skarmory will be able to hurt your team pretty badly if your Pokémon are weak to Steel or Flying. One grace with it, however, is that Fury Attack is almost useless with its 15 Power.

And finally, we get to that single reason: Altaria. This cloud Pokémon is level 33, is Dragon/Flying, and has the ability Natural Cure (heals any afflicted status conditions upon switching out). It's moves are Earthquake, Dragon Breath, Dragon Dance, and Aerial Ace. Dragon Breath is a moderately strong dragon type move that has the chance to paralyze your pokemon. And while Aerial Ace does benefit from STAB and Dragon Dance, it rarely gets used, so is more of an annoyance than anything else. Where the real danger comes from is Altaria's two other moves: Dragon Dance and Earthquake. Altaria will always open up with two Dragon Dances, which both raise its attack and speed stats by one point. Combining this with Earthquake's intrinsic lethality results in a combo that will OHKO almost every Pokémon you could have attained at this point. To add ontop of that, the type combination of Dragon/Flying results in her having the following weaknesses: Ice, Rock, and Dragon. Since there's absolutely no way you could've gotten a Pokémon with Ice or Dragon type moves at this point, your only option is Rock type. Prepare to be in for a beatdown.

Winona received multiple upgrades in Emerald, replacing her Swellow with Swablu and Tropius Her other three Pokémon, however, are the same in all aspects except level, with her Skarmory going down a level, and her Altaria going up a level and now holding an Oran Berry. Her Pelipper is exactly the same as in Ruby and Sapphire.

As for Swablu, it is Normal/Flying type, and is level 29. Its ability is Natural Cure. For moves, it has Perish Song, Mirror Move, Safeguard, and Aerial Ace. Unlike its evolution, Altaria, Swablu's Normal Flying type actually allows it have more than one weaknesses that you might actually have: Its weaknesses to Dragon is instead a weakness to Electric.

And then there's Tropius. Tropius is level 29, Grass/Flying type, and holds the Ability called Chlorophyll , which raises its speed when the arena is sunny. Rather appropriately, 3 of its 4 moves work in tandem with that Ability. Tropius has Sunny Day, Solar Beam, Synthesis, and Aerial Ace.

Defeating Winona will reward the player with

That's pretty much everything there is to do in Fortree. When you're ready, continue your journey to Route 120 and beyond.