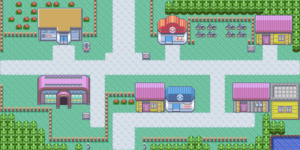 Mauville is an exciting city containing many of the key buildings found in all regions. It holds Hoenn's bike shop as well as the game corner. Most importantly, the Mauville City Gym is located here, which is where you'll obtain your third gym badge. The city also has the usual amenities like the Pokémon Center and the Poké Mart. The Poké Mart conveniently sells Paralyz Heals for the price of a Poké Ball, which will come in handy against the powerful Electric-types in the Mauville City Gym.

There is an old man in the house next to the doorless yellow building that will give you HM06 (Rock Smash). It is a decent Fighting-type move in battle, but its main use is outside of battle, letting you destroy certain rocks and clearing passageways. If you go behind the fence opposite the Poké Mart you can find an X Speed.

Head into Rydel's Cycles, the building just before the exit to Route 118, and talk to Rydel. He will ask you if you travelled for a long distance, so reply yes. After learning that you came all the way from Littleroot on foot, and in a rare case of generosity among bike owners, he'll give you a bike completely free! You are given the option of taking the Acro Bike and the Mach Bike. The Acro Bike is as fast as most bikes in other regions, but it is easier to control. You can also perform wheelies and bunny hops by pressing B, letting you go to otherwise inaccessible areas. The Mach Bike on the other hand moves faster than the Acro Bike and will quickly accelerate if you don't bump into something. Its sheer speed lets you ride up slopes and across floors full of crumbling tiles. Don't worry too much about deciding your bike, as you can exchange bikes at any time, free of charge. Each bike lets you access different areas and secrets, so make note of these locations and be sure to return to Mauville if you need to access these areas.

This is the only Game Corner in Pokémon Ruby and Sapphire, but Emerald players get to go to another Game Corner in Mossdeep City. It is where adventurous players get to test their luck, but it is quite costly, and you might end up losing more than you gain. The leftmost woman at the counter will sell you 50 coins for

In order to play at the Game Corner, you first must acquire a Coin Case. Talk to the lady in the house beside the Poké Mart. She will mention Harbor Mail, which needs to be bought in Slateport City. If you didn't buy it or obtain it at the Trick House's second puzzle, you can take the bike route there and back. The Harbor Mail may be exchanged for the Coin Case.

The Game Corner has two games - slot machine (with a chance of a high payout), or roulette (which has a slow but steady payout.) There are sixteen slot machines, twelve that don't already have people playing on them. You can insert one to three coins every time you play. One coin will make it only count the center row, two coins will make it count all three rows while three coins will make it count all three rows and the diagonals. Depending on what images you get, you can receive certain prizes.

Once your power meter is full, you have a chance to activate Reel Time. A Pikachu will start charging up a spinner. If you're unlucky, it will fail and the spinner will explode. Otherwise, the spinner will come to a stop at any number below 5, which is the number of times you can use Reel Time. During Reel Time, you can stop each reel completely as soon as you want to, so the reel wouldn't spill. If you lost a previous round before a Reel Time round, the reels will spin extra slow, making it easier for you to get the ideal combination. Getting 3 sevens will immediately end Reel Time no matter how many rounds you have left.

The other game in the game corner is the roulette, one with a one-coin wager while one has a three-coin wager. During the Game Corner's Service Day, the roulette with the 3-coin wager will have its wager increased to 6 coins. The roulette wheel is seperated into twelve spaces, each space having a combination of one of three background colors and one of four Pokémon. Bets are placed by guessing where the ball will land in, either by individual space, by species of Pokémon or by color. The payouts are as follows:

For example, if you bet that the ball lands on a yellow space and the ball does land in one of the four yellow spaces, you will get three coins. However, if you bet that a ball will land on the space with a yellow Makuhita and the ball happens to land on that single spot, you get 12 coins. Only one ball can occupy each space, so you'll have a higher chance of making a correct guess once you've made several bets. However, the balls will be reset after 6 turns. Note that the payout for betting on a type of color or Pokémon will become higher if there are already balls in one of those spaces. For example, if you already have a ball in a green space, correctly betting on a green space again will net you the 4x payout instead of the usual 3x.

Mauville Gym in Ruby and Sapphire

Mauville Gym specialises in Electric types, making it hell for Wingull and heaven for Ground types.

Wattson in Ruby and Sapphire[edit]

Wattson, like the Gym theme, uses only Electric type Pokémon, though Magnemite and Magneton both have a secondary Steel typing.

Wattson's Magnemite is level 22. Its ability is Magnet Pull, which prevents your own Steel type Pokémon from being swapped out. It's moves are Thundershock for STAB, Supersonic to confuse you, Sonic Boom for coverage, and Thunder Wave to paralyse your Pokémon. It has relatively low stats across the board, so it shouldn't pose too much of a problem.

Wattson's Voltorb is level 20. Its ability is Soundproof, which makes all sound based moves useless against it. As for moves, it has Rollout for coverage, Spark for STAB, Sonic Boom for coverage, and Selfdestruct for suicide attacks.

Wattson's Magneton is level 23. Its ability is also Magnet Pull, so keep Steel types away from it. For moves, it has shock wave for STAB, Supersonic to confuse you, Sonic Boom for coverage, and Thunder Wave to paralyse you. It has 120 base SP.ATK, so STAB Shock Wave hurts even more.

Wattson had ditched his Magnemite in Emerald in favour of an Electrike and its evolution, Manectric. His Voltorb and Magneton are the same as in Ruby and Sapphire, so look there for their information.

Wattson's Electrike is level 20. Its ability is Static, which paralyses any Pokémon which attacks it with a physical move. Its moves are Shock Wave for STAB, Leer to lower your Defense, Quick Attack for coverage, and Howl to raise its Attack.

Wattson's Manectric is by far the scariest Pokémon on his team, being level 24. Its ability is also Static, but it has the added benefit of holding a Sitrus berry, which heals it by 30HP once it falls below 50% health. It's a single use item though, so you can either steal it using Thief or let it use it. As for moves, it has Quick Attack for coverage, Thunder Wave to paralyse Special Attackers, Shock Wave for STAB, and Howl to increase its attack. Beware: Both its Speed and Special Attack stats are high, meaning that it has a high chance of wiping most of your team.

People who chose Mudkip will have the easiest time here by a country mile, since both Marshtomp and Swampert have a secondary Ground typing - making them immune to all Electric attacks.

Beating Wattson wins you TM34 Shock Wave, a powerful electric attack that never misses and can't be evaded. He will also give you your third gym badge, the Dynamo Badge. It will boost the speed of all your Pokémon as well as allow you to use Rock Smash outside of battle, letting you complete the route between Pokémon Ruby and Sapphire/Verdanturf Town and continue north along Route 111.