If you need help with wiki markup, see the wiki markup page. If you want to try out wiki markup without damaging a page, why not use the sandbox?
Cleanup required: Tables

If you need help with wiki markup, see the wiki markup page. If you want to try out wiki markup without damaging a page, why not use the sandbox?
Cleanup required: Tables 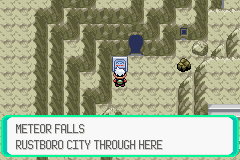 Meteor Falls (Japanese: りゅうせいのたき Meteor Waterfall) is a large cave west of Fallarbor Town with a waterfall inside, packed full of craters from the Meteors that fell here (who could've guessed?).

Another encounter with the Teams[edit]

As you enter and go down the path, you'll find Professor Cozmo, who we talked about before. He'll be surrounded by a bunch of Grunts from either Team Aqua or Magma, depending on which version your playing, along with the corresponding Team Leader. After an encounter with the other team showing up, the antagonistic team will run off with a Meteorite, to the top of Mt. Chimney. The second team will give chase, and Cozmo will thank you for saving him. From here, you can continue through the rest of the cave to the top of Route 115 (connecting to Rustboro City), or turn back and move forward to Mt. Chimney (accessible via the cable car on Route 112). Professor Cozmo will return to his home in Fallarbor Town.

Come back after defeating all 8 Gyms to access the rest of the Falls with Surf and Dive. There'll be multiple new rooms to explore, more trainers to fight, and a new pokémon to catch: Bagon.

In Pokémon Emerald, Steven also makes an appearance here. His Pokémon's strength surpass even that of the Champion's, and he acts as a sort of secret final boss in the game. The only requirement to battle him is to have the necessary HMs to reach him, and to have become the Champion of Hoenn Pokémon League by defeating the Elite Four. And all of his Pokémon are incredibly tanky. Oh, and he also has 4 full restores. Expect a long battle.

How can this thing even fly?

Skarmory is Steven's first Pokémon, and has the second highest level of them all at 77. It's typings are Steel and Flying, which limits the number of effective moves seriously. It's ability is Keen Eye, which prevents loss of accuracy.

For moves, it has Toxic for coverage, Aerial Ace and Steel Wing for STAB, and Spikes to punish you if you try swapping in anything that doesn't have the Ability Levitate or isn't Flying type.

Your best bet by a country mile will be any Electric or fire type move, as Skarmory is 2x weak to both types of attacks.

It's always watching, and that's creepy

Steven's Claydol is level 75, and has the typings of Ground and Psychic. It has plenty of weaknessed as Water, Grass, Ice, Bug, Ghost and Dark are all super effective against it. Claydol's ability is Levitate, making all Ground type moves and any arena-trap moves like Spikes useless against it.

As for moves, it has Reflect to block your attacks, Light Screen to temporarily raise the SP.DEF of itself for 5 turns, Ancient Power for coverage, and Earthquake to ruin your day (and STAB too I guess).

There is a wide range of types that are effective against Claydol, so pick and choose your favourite. Recommended ones are Grass, Water, and Dark.

Aggron is Steven's number 3, at level 76. It's typings, Rock and Steel, are notorious for the sheer amount of resistances they get. In fact, the only weaknesses it has are to Fighting (x4), Water (x2), and Ground (x2). Aggron's ability is Sturdy, preventing it from being OHKO'd right off the bat.

This land tank's moves are Dragon Claw for coverage, Earthquake for its humongous damage, and Thunder and Solar Beam to make life miserable for Water types in particular.

Thankfully, it doesn't have anything that is especially terrifying to Fighting types (excluding Earthquake), so the Fighters are the way to go here.

For Pokémon #4, Steven has Cradily. It's typing are a rather unusual Rock/Grass dual type, providing some interesting weaknesses and resistances. It's ability is Suction Cups, which negate the forced-switching effect of moves like Roar and Whirlwind.

Types to use against it are Fighting, Steel, Bug, and Ice.

Just two more Pokémon to go, and the first of those two is Armaldo. As a Rock/Bug type, it also has a unique resistance table. It's ability is Battle Armour, which prevents and and all Critical Hits against it.

It has the notable distinction of having a surprisingly wide coverage range thanks to its moves - Slash, Water Pulse, Aerial Ace, and Ancient Power - making it able to handle most types with relative ease.

The best types to take it out are Rock, Steel, and Water.

The epitome of "GG EZ" culture

Like most things, Steven leaves the scariest for last. Metagross is level 78, the highest level Pokémon of any trainer in the game (excluding Battle challenges). It is also the only one of Steven's Pokémon to hold an item: a Sitrus berry to heal itself by 30 HP. Metagross' ability is Clear Body, which prevents it's stats from being lowered from any source. And it's typing is Steel Psychic, which is even more terrifying than Claydol's Rock/Psychic.

For moves, Metagross has Earthquake, Psychic, Meteor Mash, and Shadow Ball. Thanks to its incredibly high ATK, Earthquake is capable of wiping your entire team on its own. And while it's SP.ATK is quite a bit lower, that doesn't mean that you should rest easy if it uses Psychic or Shadow Ball.

The best moves to defeat this monster are Fire and Ground.