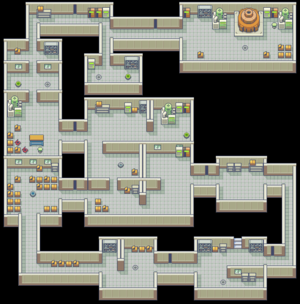 New Mauville is a power plant located underneath Mauville City. Due to its unique location, the complex is reached only by Surfing from Route 110 east under the Seaside Cycling Road to a small island east of the overhead path. Though the location is not part of the main storyline in the game, it does play home to a small side quest as well as several items and wild Pokémon, mostly Electric, making the location similar in style to the Power Plant in Kanto.

After you defeat Norman in Petalburg City, return to Wattson. He will then request that the generator in New Mauville be shut down as a safety precaution. To allow you to access the underground plant, Wattson will give you the Basement Key, which will open the door to New Mauville. After shutting off the generator, Wattson remains in the center of Mauville, ready to hand out TM24 (Thunderbolt) as a reward for your deed.

Throughout the plant, there are green and blue doors that only open when the corresponding button color is pressed. Said buttons are found on the ground. The two types of doors cannot be open simultaneously. Also, like the Power Plant in Kanto, some "items" on the ground are actually Voltorb in disguise.