A quiet little Town, but one that introduces the two most important buildings in the game: the Pokécenter and the Pokémart. 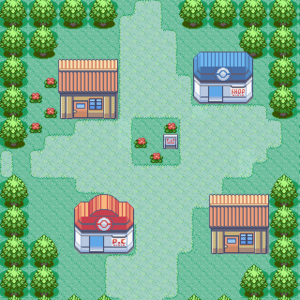 Oldale is a small little town with not much to it. It's nothing more than a stop on the way between Littleroot and Petalburg. While it does have a connection with Route 110 via Route 103, this is inaccessible until much later in the game, and isn't very useful. If you speak to the man in the first house on the right as you enter Oldale, he will give you a free potion. 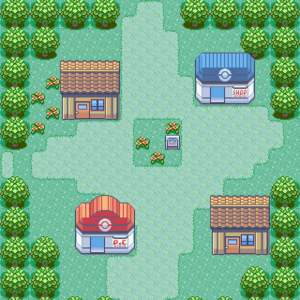 If you haven't defeated your rival, you will not be able to proceed to Route 102, nor will you be able to purchase additional Poké Balls. While you can use the Pokécenter or purchase some items, you will need to head north and win against your rival before continuing with the game. Travel northward up Route 103.

In the town, you may notice some unique buildings that stick out from the rest. The red-roofed building is the Pokécenter, and the blue-roofed one is the Pokémart.

The Pokécenter is like a motel crossed with a walk-in clinic. Here you can heal your team, access and organise your PC, or even connect with other players upstairs if you have a GBA Game Link cable!

The Pokémart is your one-stop shop for all your item needs. Inside, you can find HP-healing Potions, status-removing Heals, or even items to decorate secret bases! Each Town has different items stocked in their Pokémart (if they have one), so be sure to check each one to not miss out on anything!

There still isn't much to do here after defeating the rival. Once you have received your first set of Pokéballs, you can buy more of them from the Pokémart in town. Buy 10 Pokéballs and you'll receive a Premier Ball for free! The Premier Ball has the same catch rate as a regular Pokéball, but it looks nicer.

Don't forget to replenish your Pokémon's health at the Pokécenter, especially if you damaged a Pokémon that you then caught (Pokémon sent to the PC are automatically healed). You can head north back to Route 103 where you fought your Rival to try and catch a new Pokémon, though said Pokémon is available in later Routes at higher levels. Otherwise, that direction is a dead end. When you're ready, you can now head into Route 102 which was originally blocked by a man studying a rare Pokémon's footprints that turned out to be his own.