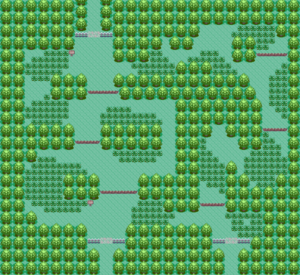 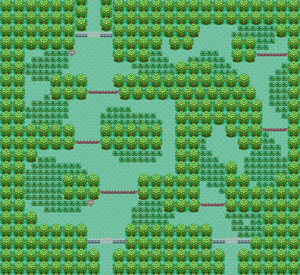 Petalburg Woods is home to many bug type Pokemon, so bring some flying type pokémon, like Taillow or Wingull. Here is also a good place to level your Torchic, so that it becomes a Combusken before the first gym. Bring some potions, as the forest is full of pokémon. If you have not chosen Treecko as your starter, it is recommended to catch a Shroomish, as Rustboro City's gym is weak to Grass type attacks. Slakoth also appears in the grass patches, and can become an extremely valuable member of your team if you choose to evolve it into a Slaking at level 36.

Eventually, you will see a man who is looking for a Shroomish. After he talks to you, a Team Grunt appears and attacks him. You will have to rescue the man by defeating the guy attacking him.

Once defeated, the Team grunt will run away, and the man will thank you gratefully and reward you with a Great Ball.

Come back after having obtained the HM Cut to access the rest of the forest. A girl will give you a Miracle Seed , an item that when held by a Pokémon, increases the power of grass type moves - considering the sheer quantity of water routes and Pokémon in these games, this will come in handy. You can also find a Great Ball and an X Attack , as well as two Tiny Mushroom s hidden in the area.