There is some tall grass with a few wild Pokémon. Wingull also appears on this route. Be careful if you chose Torchic as it's Water Gun attack is super-effective. At the end of the route will be your Rival. Talking to them will initiate your first battle. 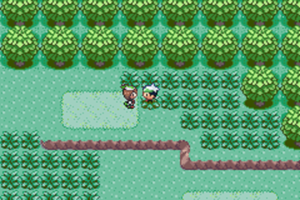 For now, your rival will only have one Pokémon; what species it is depends on which Pokémon you chose from Birch's bag. Like past games, your rival will have the Pokémon with a type advantage against yours. Since both Pokémon are still low-leveled, neither knows an attack of their own type yet, so your rival doesn't have much of an advantage just yet. Techniques like Growl, Tail Whip and Leer, can be useful if used one or two times. Also, if your Pokemon are low on health, use a potion that you received from the man in Oldale.

After you win, the rival will leave, and tell you to come back to the lab. You'll have to walk back to Littleroot Town, but this time you can avoid the tall grass by jumping over the ledges.

Once you get back to Prof. Birch's lab, he'll give you the Pokédex, and your rival will give you five Poké Balls. You can then leave for Petalburg City. Before you go, your mom walks out of your house and gives you the Running Shoes. She reads the instructions (hold down

while you're walking) and lets you go on.

When you go back to Oldale Town, the man blocking Route 102 will be gone, allowing you to get to Petalburg City.

Route 103 in Emerald without the Altering Cave.

Route 103 in Emerald with the Altering Cave.

This side actually has some useful stuff to do! For example, there's an abundance of trainers, and also some items to pick up (e.g. the Cheri Berries in the area accessible by Cut). Again though, by the time you reach this side, you wouldn't have been able to acquire a way of crossing it yet, so the river shortcut is currently useless.

The Altering Cave is an area only available after the player becomes the Champion of Hoenn's Pokémon League. The entrance to it is located on the water's edge. Originally, the cave was going to be used for events - every now and then, Nintendo would've released some codes at special events, and the codes could be used to change what Pokémon was encountered in the cave. However, none of these events ever took place, and the cave holds nothing but Zubat now.