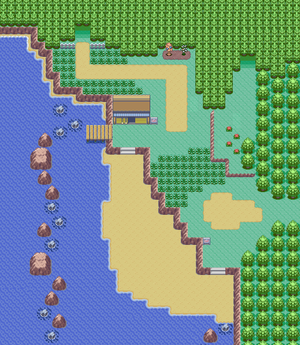 When you're done babysitting Wally in Petalburg City, head West to reach the Southern half of Route 104. The Route is split in two by Petalburg Woods, so we'll guide you through the North side after it. To see the entirety of Route 104, see Route 104 (North).

The house you'll notice just north of the beach belongs to the retired sailor Mr. Briney. Unfortunately, he isn't home right now. Remember this location, as later on, when you are heading to Dewford Town, you'll need his services. Dewford Town is on an island, so you can't get there by yourself until you have Surf. Talk to Mr. Briney after clearing the Rusturf Tunnel and he will take you there by boat.

As you move north, you'll be in Petalburg Woods.

in front of the last squares on the beach (squares meaning steps). These can be very useful if you can find them all.