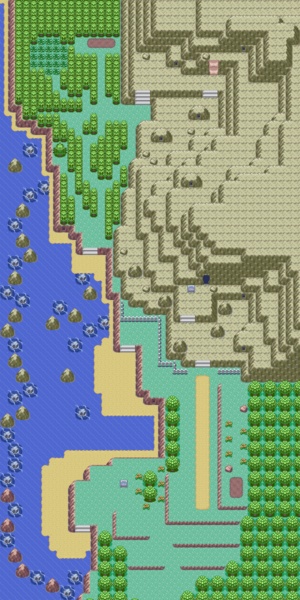 The first time you visit this route will be briefly in passing through Rustboro, but this is actually a fairly large route, although you need Surf to fully access the northern areas. The ledges and trainers in the central section are reachable both by Surf and also when you come out of Meteor Falls.

There are quite a few different kinds of wild Pokémon here and there are also items, 6 bluk and kelpsy berries, and 10 trainers.

After emerging from Meteor Falls, your plan is to get back to the Cable Car on Route 112 to reach Mt. Chimney and continue on to Lavaridge Town. To do this, it's quite a trek. You will need to go south on Route 115 to get to Rustboro before heading east, through Rusturf Tunnel, to Verdanturf Town. After a quick walk to Mauville City, you again want to go north through Route 111 to finally reach Route 112.

This part of the Route isn't accessible until you gain the ability to use HM03 Surf outside of battle.

All Pokémon on this route require HM03 Surf to be Encountered, either due to being found in the water or due to being in a patch of grass separated from the rest of the route by water.