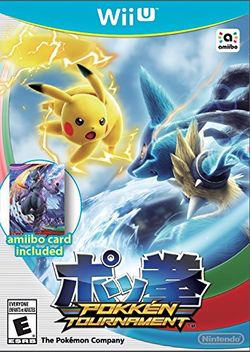 Pokkén Tournament (ポッ拳, Pokken?) is an arcade fighting game developed by Bandai Namco Games. The game combines gameplay elements from Bandai Namco's Tekken series with characters from Nintendo's Pokémon franchise. It was released for Japanese arcades on July 16, 2015, and worldwide for Wii U on March 18, 2016.

Pokkén Tournament is a fighting game in which two fighters battle against each other using various Pokémon, with gameplay similar to Bandai Namco's Tekken series. Unlike most arcade fighting games, which use a traditional joystick and buttons, the arcade version is played using console-style controllers, which are designed so that players who are not used to arcade sticks can get into the game more easily. The game focuses more on action, as opposed to the more technical gameplay of Tekken, allowing both hardcore and casual fans to enjoy it. As such, players can perform various techniques taken from the Pokémon series, such as special moves and Mega Evolutions (which can be built up from attacks using a "Synergy Gauge"). Players can also use Support Pokémon to give them special benefits such as buffs in attack or defense.

On October 30, 2015, footage surfaced of a boss fight with a new form of Mewtwo, known as "Shadow Mewtwo"; the character was teased in an official trailer a few days later. First-print Wii U copies of the game were packaged with a Shadow Mewtwo amiibo card, which immediately unlocked the character for use. The title also features online play, where players can compete in two types of online battle modes called friendly battles and ranked battles, including matches between players with registered friend codes and players who enter the same VS Code as each other.

An enhanced port of Pokkén Tournament was released on 22nd September 2017 for the Nintendo Switch under the name Pokkén Tournament DX. It includes 4 characters in the arcade edition not added to the Wii U version as well as 1 completely new character, as well as a 3v3 mode, battle lobbies and replays.