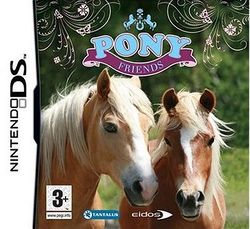 Pony Friends (わたしのポニー, Pony Friends?) is a horse-raising virtual pet simulation game, released by Eidos Interactive in 2007. Japanese development was handled by Star★Fish, and was released in that region a year later in 2008. Contrary to the what the title suggests, there are no ponies in the game; the player buys 1–3 fully grown horses, and trains and cares for them while trail-riding, photographing wildlife and racing.