There are six different races and four different classes in Pool of Radiance. The party is made of six characters.

You might decide to make a party with one each of the six races, and different combinations of classes (as highlighted in green in the table). 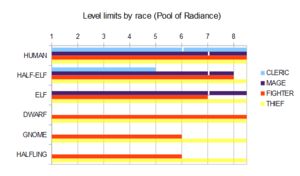 Because of the level caps, the only characters that are worthy of being exported to the next titles are those whose class/race combination gets beyond 100%.

Because of the level caps, the only characters that can sensibly be transferred to Hillsfar or Curse of the Azure Bonds are:

In the sequels, it would be pointless to play with a half-elf or a gnome.

Character portraits are at the player's leisure. You are even free to mix male and female parts.

Bodies may be chosen to suggest the class of the character.