The balloons are held down by clouds as they move left or right. When the balloons reach the extreme edge, the clouds will move down slightly and turn around. You can slow down this process by popping ballons that are on the edge of the clouds.

If you launch a balloon and it misses the clouds, the downward movement will speed up for a few seconds.

In puzzle mode, you need to clear all balloons on a stage, before they cross the red line at the bottom. While there is no hard time limit, taking at least 80 seconds will make the clouds move slightly faster.

The puzzle mode is divided into groups. At the end of each group, you may choose to go left or right to advance to the next stage. There are 15 stage groups, and you can only access five within a given play.

The end of every group of four is a boss battle. Instead of the clouds moving down on their own, the boss will jump on the clouds to push them down. It is paralyzed by any chained break, giving you some time to clear other parts of the board. 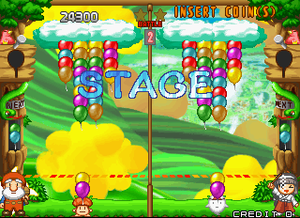 In versuses mode, the objective is to make sure your opponent has his balloons cross the red line first. The easiest way to do this is to make chained breaks, which will cause balloons to appear on the opponent's board.