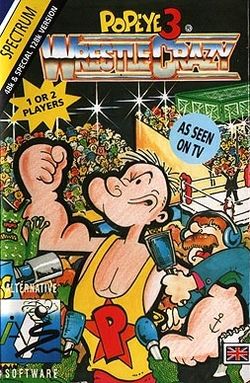 Popeye 3: Wrestle Crazy is a wrestling game, that had been developed by Bizarre Developments for Alternative Software and released upon the Sinclair ZX Spectrum, Amstrad CPC, Commodore 64 and Commodore Amiga in 1992; despite its name, it is the fourth title in the Popeye series (as the first one was the 1982 Nintendo arcade title), and was an attempt to cash in on the wrestling craze of the early 1990s. It was also the last Popeye-related video game that was manufactured in the United Kingdom.

This is taken from the back of the cassette's (or disk's, in the case of the Commodore Amiga version) inlay card, the front for which is shown in the image to the right (Popeye is interviewed by a reporter):

Our hero POPEYE has been kidnapped by the evil KRAGGS who wish to conquer the
universe. To find out which planets are vulnerable, an intergalactic wrestling
contest has been arranged. Popeye has been chosen to represent Earth, and must
wrestle against 5 different vicious aliens to save our world from the KRAGGS!
The wrestling match is on a desolate asteroid at the edge of the galaxy. Popeye
faces his first of five unearthly opponents in front of a hostile alien crowd.
Can you help Popeye beat his wrestling opponents and save the Earth, or will
our world be over run by the marauding KRAGGS!?
© King Feature Syndicate Inc. 1992

In the single-player mode, Popeye must fight against five alien opponents: Torquos (who resembles the Alien Queen, from Aliens), Vantarga, The Plasmatic Shadow Man, Flug Durch, and Andrek 5 (who resembles Robot B-9, from Lost in Space); Olive Oyl and Mr. Wimpy are also in the audience, and try to help Popeye by throwing spinach and hamburgers into the ring for him to collect (however, the aliens will also realise the value of hamburgers and try to collect them as well). Brutus, however, shall throw bombs into the ring, which will explode when touched - but Popeye can use the bombs to his advantage by steering the aliens onto them. If Popeye gets pinned by any of the aliens the game will immediately end; however, once he has beaten Andrek 5, a picture of him holding a gold medal with a number 1 on it will appear on the screen, with his catchphrase "I'M STRONG TO THE FINISH...'COS I EATS ME SPINACH!" below it. In the two-player mode, the second player has to take control of Popeye's first opponent, Torquos (but he is unable to perform the piledrive, or turbo typhoon) - and once either player gets pinned, the game will end.