Camera Shy
In every case, simply shoot the wall behind the camera with the portal gun to detach them.
9% 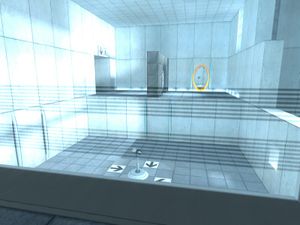 You can immediately see the entire chamber.

Transmission Received
The radio is on the wall with the hole in it. One way to reach this is to, while near the orange portal, shoot a blue portal at the ceiling just above the radio. Move it to where you collected the portal gun.
12% 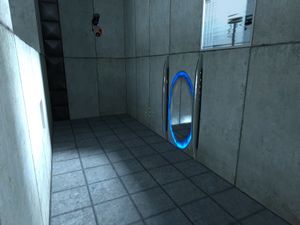 The stairwell where you will go through a portal.

Go down the stairs to the right, and wait until a portal appears, then go through it. This will take you to the ledge opposite where you first were, but you can't proceed to the chamberlock, as the door to it is closed. Walk off the ledge into the main area of the chamber, and pick up the portal gun. 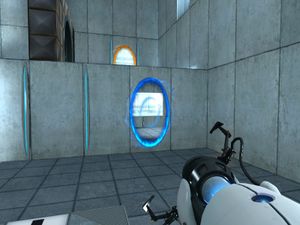 There's nothing you can do to bypass or finesse anything in this chamber, so just make sure not to waste any time. The instant that the blue portal lets you through, go directly towards the Portal Gun on its stand and jump to land almost on top of it, but slightly to the right. The instant that the gun is in your hand, place the blue portal on the floor, just slightly ahead and clear of the base of the stand. Without pausing, fall through this portal to emerge back on the ledge. Immediately and, again, without pausing, turn to the right and go through the door to the chamberlock. Practice this and get it into muscle memory so that you can execute flawlessly in your speedrun. You should be in the exit chamberlock within 36 seconds from when the entry chamberlock door opens. You will have spent more than half of this time waiting for the round door to open.