This chamber contains no doors, buttons or cubes, but is simply to test that you grasp the basics of how to use portals. The orange end of a portal is permanently in place on the middle pier of three; you're on the first, and the chamberlock is on the third. 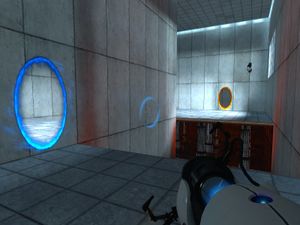 Transmission Received
Grab the radio after knocking the camera by the exit down by shooting a portal at the wall. Then place a portal near the ceiling above the second pier, on the wall facing the orange portal, at the corner. Then hold the radio into the orange portal.
15% 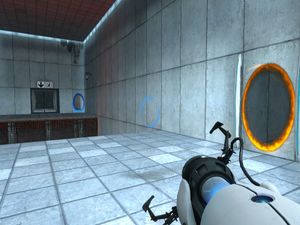 Well done. Remember the Aperture Science "bring your daughter to work" day is the perfect time to have her tested.

For an effective speedrun of this chamber, you need to move quickly and economically, but also realize that there is no need to walk out into the main area before you begin. As you leave the entry chamberlock, place your blue portal on the wall straight ahead but two panels to the left. Then move right up to it and you will trigger both portals to open. Experiment with exactly where you need to place the portal so that you pass the trigger point just as you walk into it. When you emerge from the orange portal, turn to the right and place the blue portal near the exit door. Don't waste any time turning around; move sideways back into the orange portal to emerge from the new blue one and then walk into the chamberlock. Practice this using different placements of the second blue portal, to the left, right or even above the exit, until you figure out which works best for you. Then practice again and again until you just flow through the level and you're ready for the speedrun. You should be in the exit chamberlock within nine seconds from when the entry chamberlock door opens.