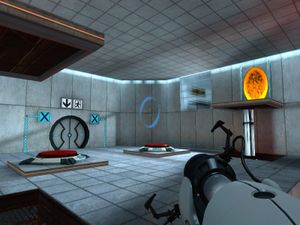 An overview of the chamber.

This chamber is the first real puzzle of the game. It consists of a single door to the chamberlock, but for the door to open, two buttons need to be pressed. One cube is down in a pit as with the last chamber, while another is on top of one of two platforms. On the other platform is a fixed orange end of a portal.

Transmission Received
The radio is behind the door opened by two buttons. Shoot a portal under it before stepping through the door, and drop it into the pit that contained one of the cubes.
23% 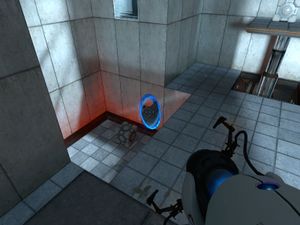 The portal to retrieve the first cube.

Fire the portal gun down into the pit, then walk into the pit (Portal does not have falling damage, for good reason, and this is also why Chell is wearing "long fall boots") and pick up the first cube. Return through the portal to the platform, walk down to the main area, and place the cube on a button. 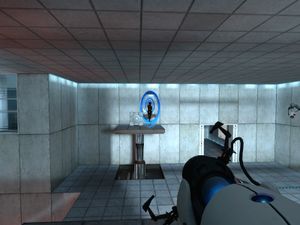 The portal to retrieve the second cube. 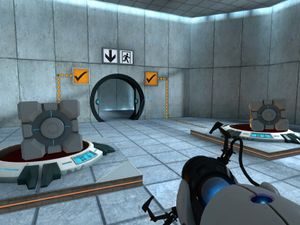 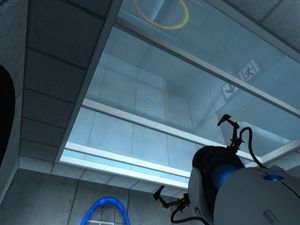 Portal to the exit.

However, before you can proceed to the next level, you must hear one of the many amusing lines GLaDOS utters throughout the game, contradicting the statement made at the end of the previous chamber:

Static once more subsumes the announcement.

To reach the chamberlock – which is on a floor above you – you need to notice that there's a fixed orange portal end in the ceiling above the chamberlock. Simply create a portal in the wall next to you, and walk through it to fall down next to the chamberlock. Whenever you go through a re-orienting portal in this manner, you will always land feet-first.

If either of the throws fail, you'll have to jump down, fetch the cubes to the buttons and walk through the door into the second room. If you've a reasonable chance of making the throws it's worth trying because failure is not too expensive. If you can't throw worth a damn, however, then don't plan to and just practice getting the cubes near the buttons as quickly as possible. Once you're into the second room, there's nothing you can do but place the blue portal under your feet and move promptly forward after you fall through. In fact, even this doesn't help with the total time because GLaDOS has to finish her recitation before the level ends.

If you throw both cubes and get them both on their buttons, you should be in the exit chamberlock within twenty five seconds from when the entry chamberlock door opens. Without the throws, expect a significantly longer time because of the walking. After placing the cubes on the buttons, you might try portaling back up onto the platform and then into the second room to improve your time.