Transmission Received
The radio is within the small opening between the two sections. Retrieving the radio is difficult, especially with the danger of it hitting the grid and disappearing (remember to save, as the radio will NOT reappear!). Some possible options: Whichever method you use, proceed to bring it to the exit.
38% 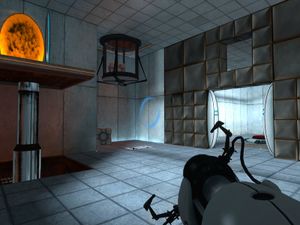 An overview of the chamber.

This chamber is more an exercise in ignoring extreme pessimism from GLaDOS, rather than a difficult challenge. The level begins with GLaDOS saying:

The Enrichment Centre regrets to inform you that this next test is impossible. Make no attempt to solve it.

Despite the pessimism, this chamber is easily solvable. Do not worry if you destroy a cube in the emancipation grid, as another one will simply be deployed for you.

To begin, create a portal at ground level so that you can take a cube up to the platform, using the fixed orange end of the portal there.

Once a cube is placed right in front of the orange portal, you have two options. You can either shoot a portal through the small opening (above the emancipation grid; with the radio on your second playthrough) so that you can simply walk through the orange portal with the cube to the button, or you can walk without the cube through the grid, and then create another portal somewhere on the other side of the room which will then lead to the cube; collect it and put it on the button to open the door and allow you to reach the chamberlock. Remember that if you pass through the grid, the blue portal will disappear.

Fantastic. You remained resolute and resourceful in an atmosphere of extreme pessimism.

There is a good opportunity for a finesse in this chamber. Disregard the Walkthrough, above. Advance promptly from the entry chamberlock towards the emancipation grid, keeping your attention on the cube dispenser. As soon as the cube has fallen, place your blue portal under it so that it passes through the orange portal and comes to rest on the raised platform (if you place the portal too early, the momentum of the cube may carry it off of the platform). While this is happening, strafe to the right through the grid and, once you're completely through, move the blue portal to the wall ahead of you. Grab the cube through the portals, turn, walk to the button and put it on. Walk through the open door to the chamberlock. From the opening of the entry chamberlock to your arrival in the exit chamberlock should be about sixteen seconds.