Camera Shy
There is one camera:
36%

Chamber 10 is where Portal starts to become increasingly more challenging, as you move from the learning to the testing stages of the game. This chamber is where you get to apply the laws of physics to the game, and use your momentum (usually downward) going into a portal to cross horizontal gaps. 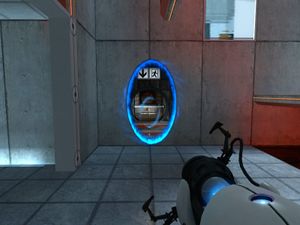 The first portal, in the wall. 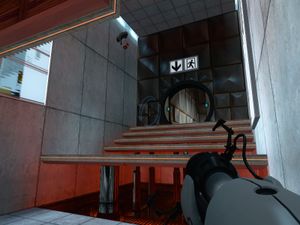 An overview of the first room.

The first room is pretty simple. First notice that you cannot jump high enough to reach the first step. From there, look up and back to see the fixed orange portal. What you can do then is create a portal in a wall, then walk into the wall from a little distance away. Your forward momentum will carry you out of the fixed orange end of the portal on the panel onto the steps, and then you can go into the next room.

Using the camera to boost yourself

While not the intended method, it is not hard to use the camera to give enough height to just jump onto the step. Shoot a portal at it so it falls. It is possible that it rolls close enough to grab, but if not, you can usually shoot a portal under where it landed, and then grab it once it falls through. Another way is to crawl under the steps and shift it by grabbing it between the steps. In any case, just place it on the ground and hop on it, then simply jump onto the first step. 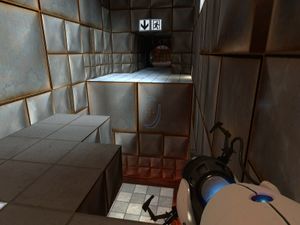 An overview of the second room.

Diagrams on the floor; downward momentum is converted to horizontal momentum. 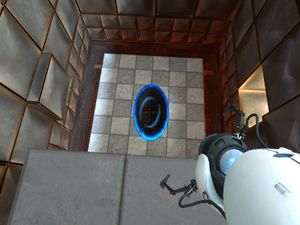 The second portal, in the floor.

Like the last room, look above you for a fixed orange portal on a suspended panel. Walk to the edge of the pit and look down to see the only reachable floor to put portals on. Place a portal on the floor at the bottom of the drop, then fall into it. Your downwards momentum will carry you far when you exit the orange end of the portal, and you can go into the next room.

Spectacular. You appear to understand how a portal affects forward momentum. Or to be more precise, how it does not.

Transmission Received
The radio is in the third section, on the left. To get it, proceed with the test until you are on the middle level, then stand as close as you can to the radio and jump towards it, grabbing it when you are close. Take it down to the orange portal.
42% 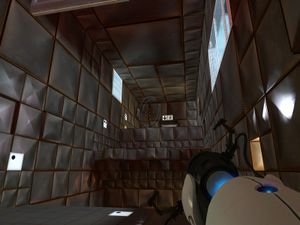 An overview of the third room.

The third room takes it a step further, and has you climb up to a higher level using a two-step process converting downwards to horizontal momentum. 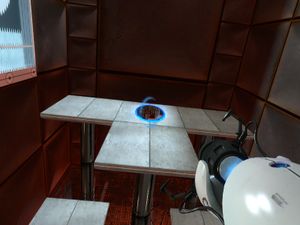 The third portal, on the panel.

This time there is a fixed orange end of a portal in the floor at the bottom of the drop. Once you look up, some of the wall panels will extend out. Place a portal on the extended panels (it doesn't really matter where, but as a general rule, the higher the exit portal is, the further you'll go), and fall into the orange portal end. You'll exit on the second level. 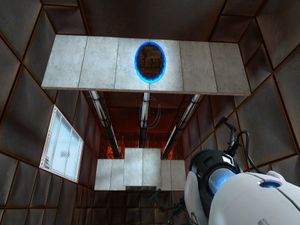 The fourth portal, on the panel again.

Once again, when you look at them, some of the panels will move forwards so that the next jump is possible. Once they've finished moving (portals can't exist on moving surfaces), place a portal on the panels again, and then fall from either level back into the orange portal end. You'll land on the third level, and be able to exit to the chamberlock.

Momentum – a function of mass and velocity – is conserved between portals. In layman's terms: speedy thing goes in, speedy thing comes out.

The non-portalable surfaces in this chamber constrain you to solve it with flings, more-or-less as described in the walkthrough, above. We will, however, try to be a bit clever in the third room. Of course, don't waste time looking around; you should know the chamber thoroughly and move smoothly through the solution without pause.

As soon as the chamberlock door is open, move forward and, while walking, place a blue portal on the floor at the foot of the steps in the first room. Go and stand on it. You will have passed the trigger that opens the orange portal, so you will fall through. As soon as this happens, move forward again, up the stairs and into the second room. Don't pause; you should know what to do without looking around, so go to the edge of the pit and fall off. Place the blue portal on the floor under you as you fall, go through and out of the orange portal above the door you came in through. Again, press and hold the forward movement key the instant you emerge from the orange portal and go into the hallway towards third room. About thirteen seconds should have passed since the entry chamberlock door opened.

Turn around in the hallway and enter the third room going backwards and looking up. This is necessary to trigger the panel to move out from the wall. Keep going backwards, looking at the panel as it comes out, and you will fall into the next pit. Go backwards as far as you can so that you are behind the orange portal, but don't waste time looking down to check. As soon as the panel stops moving, shoot the blue portal on it as high as possible and then look down and move forward to the orange portal. Pause briefly before you fall through to check your momentum, otherwise the double-fling may not work. Go through once, fall from the blue portal into the orange portal for a second time and you will fly out of the blue portal again, this time with enough momentum to reach the platform outside the exit chamberlock. Walk out. The total time from when the entry chamberlock door opens to arriving in the exit chamberlock should be twenty seven seconds.