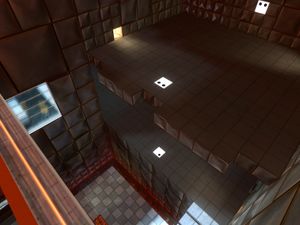 An overview of the bottom (starting) area of the chamber. 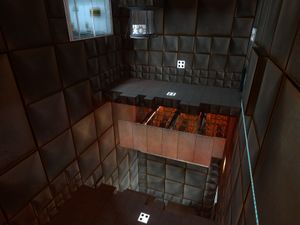 An overview of the top (finishing) area of the chamber.

This chamber is about using both portals to climb up to the top of a tall room consisting of several different levels on alternating sides of the room. It is also a reminder of how momentum can be applied to portals. Throughout this chamber, the number level referred to is reflected by a small white square in the game containing that many dots. 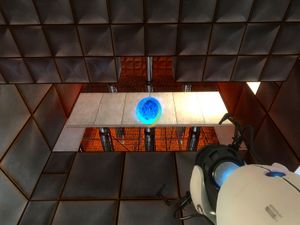 Your first exit portal to get you onto the second level. 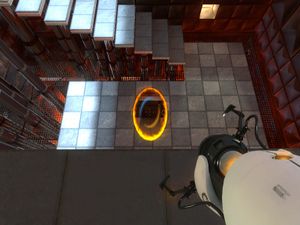 The portal into which you'll fall many times.

As with previous climbing puzzles, the trick is to get the momentum. In this case, a pit at the bottom of the chamber allows for that, so place an orange portal (

Transmission Received
While being able to faintly hear it, it is difficult to spot the radio. When on the second level, you can see it resting on the middle support for the higher platforms. In order to reach it, have one portal on the bottom, and the other portal on the angled platform. Fall from the first level into the bottom portal. This gives you just enough momentum to fly in between the fourth level and the platforms. Carefully walk along the support and grab the radio. Bring it behind the button, under the angled platform.
50% 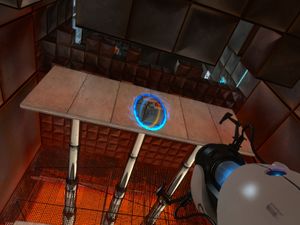 The same can be done to get you onto the third level, re-using the orange portal in the pit, and placing a new blue portal on the next higher set of panels.

You'll notice there's a button on the third level. You can see that this activates a door on the fourth level, and thus a cube will need to be placed on it in order to exit into the chamberlock. 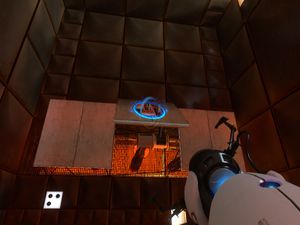 When you look at the cube dispenser, it will drop a cube, and when you look at the panel just above the button, it will angle upwards. Place a blue portal on this angled platform and once again fall into the orange portal to get onto the fourth level. It is ok to fall onto the second level before jumping in the orange portal, as this still gives you enough momentum. Now, pick up a cube and jump back onto the third level. If you miss this jump, simply go all the way to the bottom of the chamber and walk into the orange portal, as the lack of momentum will put you on the third level.

The cube needs to be placed onto the button, and then you need to repeat the journey through the portal to get back onto the fourth level and enter the chamberlock.

After several chambers in which most players have a chance to shave time from their speedrun with reasonably easy tricks, we're back now to more-or-less following the normal walkthrough, above, just executing promptly and perfectly. There is one chance at a finesse - the cube throw described below. Don't stick with the order of portal placement described in the walkthrough, however. For example, at the very beginning, place the blue portal on the high extended panel first and then hurl yourself into the pit, placing the orange portal beneath you as you fall. Also, make sure to look at what will become the angled panel and the cube dispenser as soon as you can so as to trigger them to do their jobs.

When you have the cube in hand, the walkthrough has you "... jump back onto the third level". As an alternative, you could try throwing the cube onto the button from where you stand and just walking out. This is a difficult throw; much more so that the gentle toss suggested in Chamber 05. If you miss, but the cube lands on the third level, you can leap after it and lose maybe a second. But if the cube falls further down, you will lose much more time retrieving it. Therefore, you should only try this if you're fairly sure of success.

You should be in the exit chamberlock within thirty six seconds from when the entry chamberlock door opens; less if you can execute the cube throw.