Transmission Received
Right before the first piston room, turn to the right. Instead of going up the stairs, sneak to the left and shoot a portal through the gate. A side room you can reach from there contains the radio. Bring it to the center and back of the top of the platform just above the two vertical pistons that you use to get through a ceiling portal.
92%

Your escape continues, as you maneuver around tons of pistons and portal your way around. The mysterious writings continue as well, helping point your way, while making you wonder about the sanity of this unknown helper. 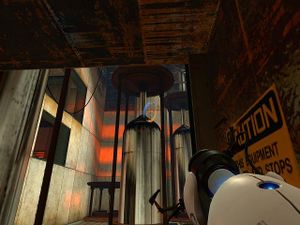 Pistons going up and down.

Shortly after climbing out of the vent, you will see a set of pistons smashing themselves against the ceiling, and the exit, as indicated by the red arrow, to the far top available through a crumbling ladder. 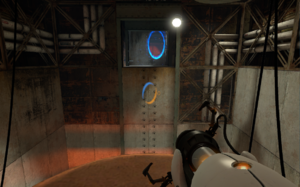 Portal past the top of the broken ladder.

There are a number of methods to get there. One way is to portal your way up to the top side room, from which you can shoot a portal at the exit. The center piston, however, doesn't touch the ceiling. As such, you can climb on it and ride it to the top. Shoot a portal into the corridor, then go through another portal you set at ground level. 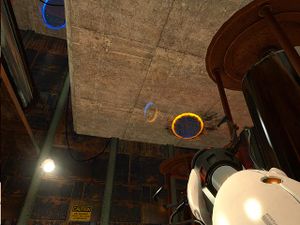 It helps not being crushed when going through the portal.

Didn't we have some fun, though? Remember when the platform was sliding into the fire pit, and I said, 'goodbye', and you were like, 'NO WAY', and then I was all 'we pretended we were going to murder you.' That was great... is anyone there? 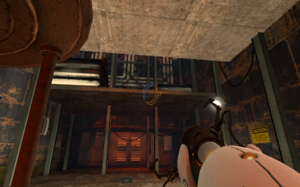 Keep the crushing pistons in mind. You can safely land on the far one.

Follow the corridor, and you should see two pistons touching the close ceiling, with almost no visible exit. However, there is a usable section to the left on a slightly higher ceiling. Put a portal there, and a portal above one of the nearby pistons and go through. Aim to land on top of one of the horizontal pistons so you don't get crushed. 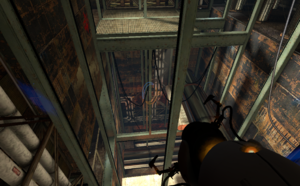 When you climb up onto the platform, you should see a marker showing the exit upward, along with a usable wall up high. Fire a portal up there, and shoot a portal on the ground, and jump through. When you fall, fire a second portal to complete a double fling. Alternately, use the side room that you can portal into to create a wall portal that you can simply walk through to start the fling.

The next corridors are obstructed with wall-to-wall pistons. To get past these obstructions, simply fire a portal on the other side, create a local portal and go through. 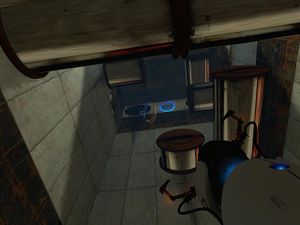 The fastest route up is firing a portal here.

You should be in a tall room filled with pistons, and you need to climb it. Looking to the left of the portal you just entered from, the helper has pointed the way to the exit once again. The fastest route up is firing a portal at the location in the screenshot, but if you can't get a clear shot, you will have to work your way up slowly.

Once you have the portal in that position, go slightly into it, and fire a portal on the opposite floor. Go through to reach a place with glass piping. 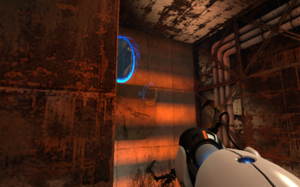 The top portal that puts you above the piston. 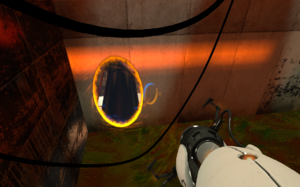 Jump when the piston has just made it to the wall, as can be seen through the portal.

There are no nice floors here, so you must walk across a few glass tubes, and you will need to jump down. Quite quickly, you will come upon a piston that's mysteriously smashing against a wall. Fire a portal above the point against which it's smashing to create the exit.

Next, you need to find a place to create your entrance. The safest location is on the lower wall where the glass tube bends, on the same side of the piston. Time your jump so that you pass through the portal as the piston is extended.

Cross the piston, and drop down the hole.

Three of the four sections of this part of the game can be solved more cleverly than described in the Walkthrough, above. As always, you need to memorize portal positions and practice the movements to make it through in the fastest time.

Five-piston room : To avoid having to wait for the pistons to move to the desired position, solve this section using portal standing. Turn to the right as you enter and place the orange portal high on the right-hand wall, avoiding the part of the wall where the highest section is not portalable. Keep moving towards the right-hand wall and place the blue portal at ground level. Turning to the right, move sideways through the portals just until the glow around the edge of the portal changes from blue to orange. Shoot a new blue portal at the floor deep inside the room above the broken climbing rungs. When the portal lands, but not before, pull back from the portal and pop out in that room. Immediately put the blue portal anywhere on the wall nearby to avoid accidentally falling back into it on the floor. It should take you eleven seconds to reach this point from the start of the level. Turn to the left and proceed to the next room. 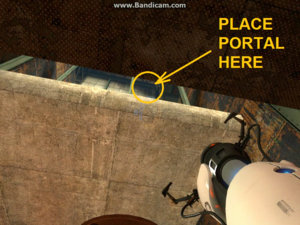 Ceiling portal : As noted in the Walkthrough, when you enter the room with pistons that hit the ceiling, you can't at first see where you should portal to. The way forward described is the first that comes to hand, but there is a much faster way. Facing the pistons, walk backwards, looking up. Watch the gap in between the concrete slab above the pistons and the lower, rusted steel platform behind you. As this narrows, a portalable wall very high up will come into view. You need to get the orange portal at the top of this wall and to the right-hand side. Practice and learn exactly where you have to stand to do this. Jump onto a piston, place the blue portal directly overhead and ride up through the portals. As soon as you emerge and begin falling, look down and move the blue portal to the floor under you, turning the maneuver into a double-fling. You will go directly to the landing that leads to the next section. This should be at the twenty eight second mark. Turn left and make your way through the corridors, portaling normally (but promptly) past first the wall-to-wall pistons then the two stumpy floor-to-ceiling pistons.

Cross-pistons : As in the five-piston room, waiting for the pistons to move into a favorable position wastes time, so again use portal standing. As you step out of the portal that brought you from behind the pistons, look up and move sideways to the right until you have a clear line of sight to the very top of the far wall. Put the orange portal up there and the blue portal on the wall nearby at ground level. When you look through the portals, you will see the area you need to get to straight ahead. To judge how far to advance without falling out of the orange portal, you may want to turn sideways and look for the color change. Then turn again to look forwards, fire the blue portal at the distant floor and just after it lands (but not before) pull back and to one side to pop out and land clear of the portal. You should reach this point at or before fifty seconds. The next area will be ahead of you, so go forwards and drop down onto the tube.

Cube tubes : There is no special way to get through this section, so just follow the instructions of the Walkthrough and execute quickly and perfectly. You should be jumping over the railing to end the level at one minute and ten seconds.