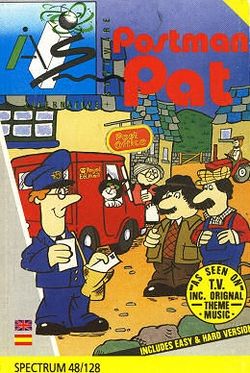 Postman Pat: The Computer Game is an action game that was developed by Enigma Variations for Alternative Software and released on the Sinclair ZX Spectrum, Commodore 64 and Amstrad CPC in 1988, and the Commodore Amiga in 1989; it is, again, based on that Woodland Animations television series of the same name (which had originally aired upon BBC1 from September to December 1981).

This is from the back of the cassette's (or disk's, for the case of the Commodore Amiga version) inlay card, the front of which is shown in the image to the right (Pat stood with some of the other villagers):

It seemed just another day to Pat as he climbed out of bed. Little did
he know that he would be rushed off his feet by all the work that
faced him this morning as he did his round of Greendale. Parcels,
letters and all sorts of odd jobs would keep him very busy. You can
help Pat and Jess to get the job done by guiding their van around the
village.
You start the game by finding the Post Office where Mrs. Goggins will
tell Pat what he must deliver. It will be either a number of letters
or a parcel for one of Pat's friends. You can drive around the village
(and can reverse if you need to turn around) in order to find your
friend's house and deliver the parcel. Letters are delivered to the
houses which flash as you pass them. To deliver a letter just press
the Fire button as you pass the house. If you miss you have to get Pat
out of the van using the Fire button and guide him to pick up the
letter and then try again.
If Peter Fogg's sheep get loose you can help him by herding the sheep
back through the gate (you must find them yourself)!
Watch out for oil slicks on the road and try not to knock over Miss
Hubbard who is very unsafe on her wobbly bike.
Because Pat is such a busy chap you have only got a short time to
complete all your tasks. If you run out of time the game is over.
© Woodland Animations 1988