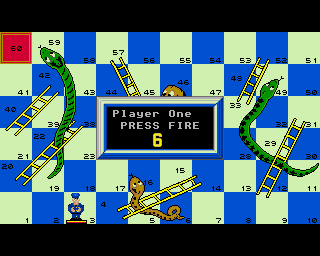 If you push the joystick's button after selecting the option "SNAKES AND LADDERS" on the menu in the Commodore Amiga version of this game (again indicated by it flashing), the text "HOW MANY PLAYERS?" shall again appear on the screen; push the joystick up and down to select either 1, 2, 3, or 4, then press its button to confirm your choice. The game shall then proceed to the Snakes and Ladders board shown above on which Player 1 is Postman Pat himself, Player 2 is Jess, Player 3 is PAT1 and Player 4 is a postbox - and when the text "Player One/Two/Three/Four PRESS FIRE" appears in the centre of the screen, you will have to push the joystick's button to cause a rapidly-changing number to appear below it (and once it's stopped it indicates how many spaces your character will move). Your character will now move the shown number of spaces on the board; however, if it lands at the bottom of a ladder it shall move up it to the top, and if it lands at the head of a snake it will move down it to its tail. The first player to arrive at space 60 by exact count (if you cannot use the full count of the shown number, you have to forfeit your move, which may allow another player to steal a win!) is the winner.