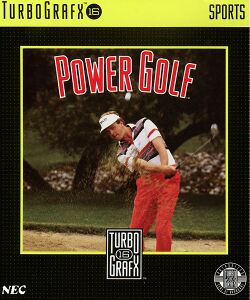 Power Golf is a golf simulator for the TurboGrafx-16 developed by Hudson in 1989. It was one of the system's launch titles and the first golf game to be released for the system in the US. The player selects between Stroke Play (the single-player), a Match Play (competition with a computer player) or Competition (competition between two or three human players in a hotseat mode). The player(s) then chooses their golfer (between a female and two male characters) and plays a standard eighteen hole game of golf. Played using primarily an overhead view of each hole.

As with many golf console games of the era, the player is required to select the club they wish to use and the direction they wish to hit the ball towards. They then have to tap the button twice on a power gauge: once at the top of the swing and the second at the moment the club hits the ball. With the right timing, the ball will fly a fair distance in the desired direction. If the timing is off, the ball will not go quite so far and may even hook or slice to the side. The player must also be wary of regular golf course hazards such as sand bunkers and bodies of water.