From StrategyWiki, the video game walkthrough and strategy guide wiki
(Redirected from Power League)
Jump to navigation Jump to search 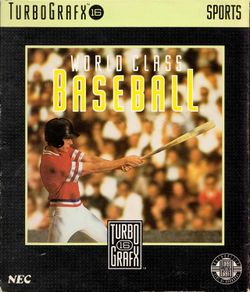 World Class Baseball, originally published in Japan as Power League (パワーリーグ, Power League?), is a baseball game developed and published by Hudson for the TurboGrafx-16. It was re-released for the Wii Virtual Console in North America on September 17, 2007, and in PAL regions on September 21, 2007. World Class Baseball features 12 teams that must be defeated in the single player Pennant Mode, a knockout competition. Upon defeating all teams, the player faces off against the Turbo Tigers, a non-player selectable team of all-stars. The game also gives the option for players to compete in a one or two player versus exhibition game, or to watch two computer controlled teams play each other.

It was the second baseball game released for the PC Engine in Japan, after Pro Yakyuu World Stadium. In comparison to Pro Yakyuu's more cartoonish style, World Class Baseball attempts to be more realistic, similar in presentation to Jaleco's Bases Loaded for the NES. This game is the first in the PC Engine's longest lasting game series, spanning five releases. However, as the first outing in the series, it doesn't compare well to its sequels. The next game, Power League II improves upon this game in almost every way.