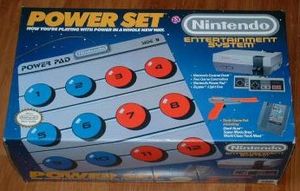 The Power Pad (known in Japan as Family Trainer, and in Europe and briefly in the United States as Family Fun Fitness) is a floor mat game controller released in the United States for the NES. It is a gray mat with twelve pressure-sensors embedded between two layers of flexible plastic. It was originally developed by Bandai.

Bandai first released the accessory in 1986 as the Family Trainer pack for the Famicom in Japan, and later released in the United States under the name Family Fun Fitness. Soon after its American release, Nintendo bought the rights for it and rereleased it in 1988 as the Power Pad, along with the game World Class Track Meet, which was a rebranding of an earlier game.

The accessory is laid out in front of the video display for various games, generally plugged into the second controller port, with players stepping on the large buttons to control gameplay. There are two illustrated sides to the pad: Side A, which is rarely used, has eight buttons, while side B has twelve buttons numbered from 1-12.

Games using the Power Pad often test players on their timing and coordination, memory, "running" speed, or allow them to play music with their steps. Games such as Dance Dance Revolution can trace the lineage of their control mechanisms back to the Power Pad (see dance pad).

It was announced by Bandai Namco that the Power Pad will see a reappearance for the Wii. This version of the pad will also work in conjunction with the Wii Remote. It will be released as Active Life in the US (known as Family Trainer Athletic World in Japan) in 2008.

The following 15 pages are in this category, out of 15 total.