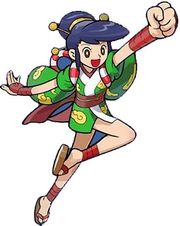 Ayame is a playable character in the Power Stone series. She is a 16 year-old from Oedo who covers as the star artiste of a traveling theater troupe, but is actually a ninja. At the order of her master, she embarks on a quest to find the legendary Power Stones. She is energetic and cheerful nearly all the time. In the anime, she initially was an antagonist to Falcon, trying to steal his Power Stone through trickery, deception, and force on various occasions. Eventually she becomes his friend.

Fighting Characteristics
Ayame is a fast character with weak normal attacks. Her defense is also the lowest in the game. Even so, Ayame is still a very dangerous character. She has the fastest running speed in the game and is also one of the 2 characters that can double jump. These abilities help to make her a hard opponent to land hits on.

Combo Chains
Ayame uses taijutsu for hand to hand combat. Her normal combos don't do much damage but they are varied, quick and have plenty of utility. 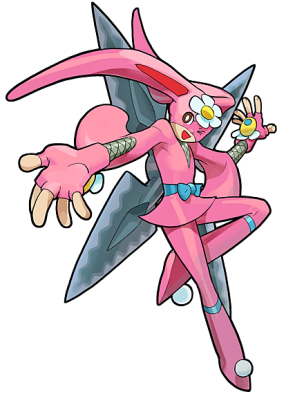 Ayame turns in to a pink-clad ninja with what appear to be bunny ears in her Power Change. Like in all Power Fusion modes, she gains access to powerful special and super attacks. Attack in this mode are designed for long range and keep way, as well as surprisingly fast and accurate. Her attacks in this mode involve shuriken, teleportation and super speed.

How to play
Appendices
Characters
Retrieved from "https://strategywiki.org/w/index.php?title=Power_Stone/Ayame&oldid=794377"
Hidden category: