This is the first game in the Prey series. For other games in the series see the Prey category. 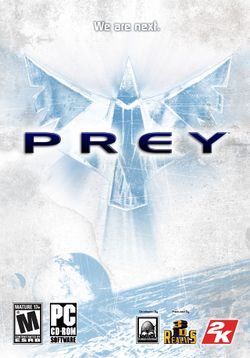 Prey is a first-person shooter video game developed by Human Head Studios and produced by 3D Realms using a heavily modified version of the Doom 3 engine. Venom Games is responsible for the Xbox 360 port of the game.

In October 2006, 3D Realms CEO Scott Miller announced that the game is a commercial success on both PC and Xbox 360 with combined 1 million copies sold worldwide to date.

On November 29, 2006 Aspyr Media announced a Mac port, with an anticipated release date in January 2007.

On November 30 2006, Prey was released on Steam for $49.95 US. Previous purchasers of both the retail or downloadable version are able to activate a copy using their existing CD key. Soon after, the price was lowered to $19.95 USD in North America and South America. All other countries retain the same price.

The story focuses on Domasi Tawodi (Cherokee) (a.k.a. Tommy), a Cherokee garage mechanic and former U.S. Army soldier living on a Native American reservation in Oklahoma. At the beginning of the game Tommy is in a bar owned by his girlfriend Jen. Domasi is tired of living on the reservation, and constantly tries to push his heritage away. At the same time he tries to convince Jen to leave home with him, if only for a short while, to which she refuses steadfastly. A series of unpredictable events leads Tommy on a path to save humanity and the bonds to his spiritual heritage.