From StrategyWiki, the video game walkthrough and strategy guide wiki
< Prince of Persia (2008)
Jump to navigation Jump to search 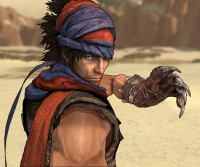 The Prince is a drifter, born to an ordinary family; he is a man without title, without a calling. A prince in name only, he wanders from adventure to adventure in search of fortune.

While the Prince's adventures have taken him across the ancient world and into encounters with robbers, mad kings and fantastical creatures, each time fate has stripped him of his treasures and left him with only stories to tell. But this time, fate has more in store for him... this time, he may find more than gold. 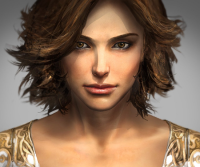 Born the princess of a small state, Elika has lived in a land cut off from outside contact. For generation upon generation the Ahura have guarded the Tree of Life to prevent Ahriman from being released to plague the universe once more.

A practical and intelligent woman in a patriarchal society, Elika's life has been given to duty, which has not stopped her from dreaming of more, but there has never been anyone beyond her land; what exists beyond duty.

Ahriman, he who spawned the darkness of space, who was the first to feel envy and hatred, was not content with possessing and controlling his half of the universe. Craving more, Ahriman set out to take all that remained from the God of Light, his brother Ormazd.

The Hunter was a prince who grew up surrounded by riches and indulgence. Everything he wanted was his and more. Of all his fancies his favorite pastime was the hunt and he learned his skills from the best advisers he could find. Soon he had tracked and killed every kind of creature living in the kingdom. What challenges now remain for him, and who can give it to him?

A dedicated and brilliant man, the Alchemist worked and studied in the City of Light. Having achieved many successes, the Alchemist felt that he was close to unlocking the secrets of the universe. However, as his studies progressed, so his health began to fail. Desperate to continue his work, he turned to Ormazd for help. But Ormazd was deaf to him, and so the Alchemist looged for another way to extend his life - another master to serve.

A beautiful woman adept at navigating the politics of court, the Concubine knew that despite her intellect, the power of her land lay with men. Her only route to influence and riches was to use hear beauty to manipulate the power she craved. With beauty, though, comes jealousy, and when the Concubine became involved with a man of great power, another woman had her beaten and scarred. Left without her way to manipulate the influence she worshiped, the Concubine turned to another who could give her power.

The Warrior was king of a peaceful people besieged by violence on all sides. As the king faced destruction, he heard Ahriman's voice offering his people salvation in return for the king's soul. The king accepted Ahriman's offer and became a creature capable of killing those who sought the end of his people. Having defeated the attacking forces, however, the kind realized that he could not return to his people, for he had become everything they rejected. So, the king left his people, fulfilling his vow to serve Ahriman.