Princess Tomato in the Salad Kingdom/Walkthrough

Princess Tomato in the Salad Kingdom is an exploration adventure game in which you are free to move and interact with characters in any fashion that you like within each chapter. However, once the requirements to complete a chapter have been met, you will automatically advance to the next chapter, and there is no opportunity to return to a previous chapter. There is no chance to miss something that is necessary in a future chapter, as the chapter which contains an important item will prevent you from advancing until you are in possession of that item. Additionally, items that are unnecessary are discarded from your inventory whenever you advance from one chapter to the next. 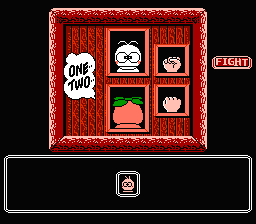 A major component of getting through the later chapters is winning at Finger War battles against certain enemies. Finger Wars consists of two contests per round. A player must win both contests to score a "point." The first contest is a traditional rock-paper-scissors contest. Each player picks one of those three choices, and the winner is determine by the following formula: rock beats scissors, scissors beats paper, and paper beats rock. If both players make the same choice, the contest is started over. Otherwise, both player move on to the second contest, in which the loser must try not to look in the direction that the winner chooses to point. All you must do is choose a direction to point if you were the winner, or a direction to look if you were the loser. If the directions match, the winner gets a "point." If the directions do no match, no points are awarded and the contests start over.