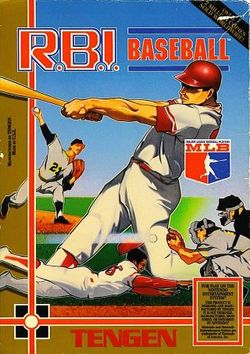 Pro Yakyuu Family Stadium (プロ野球ファミリースタジアム, Puro Yakyū Famirī Sutajiamu?, lit. Pro Baseball Family Stadium) is the first game in a very popular Japanese baseball series produced by Namco, originally developed for the Famicom. It was the second best selling Famicom game released in 1986, selling approximately 2,050,000 copies in its lifetime. It is particularly well known for its trademark body characteristics, portraying the players as doughy and rounded with spherical heads as opposed to lean and athletic. It is also well known for its perspective on the first and third bases while the view is zoomed in on the pitcher and batter. After the third edition of the game, the series would be renamed Famista, short for Family Stadium, and more editions were developed for the Famicom, Super Famicom, Game Boy, Nintendo 64, Game Boy Advance, Nintendo DS, and the Wii.

The first game of the series was released on December 10, 1986. It featured 10 different teams, all of which play against each other in the fictional Piccari Stadium. and was a big success in Japan. One year later, Namco released an upgraded edition of the game, labeled Pro Yakyuu Family Stadium '87. It was only a minor update to the original game, and featured two additional teams for a total of 12. It was the fourth best selling Famicom game released in 1987, selling approximately 1,300,000 copies in its lifetime, right behind Moero!! Pro Yakyuu by Jaleco.

In 1987, Atari Games, the American arcade division and Tengen's parent company, ported Family Stadium to the Nintendo Vs. Series and released Vs. Atari R.B.I. Baseball. The game was also a success and the programmer for Vs. Atari R.B.I. Baseball, Peter Lipson, then started on a console version for the NES. Although it featured the same excellent gameplay as Pro Yakyuu, the original R.B.I. Baseball did not have a MLBPA license.