Professor Layton and the Curious Village/Chapter 3: The Missing Servant 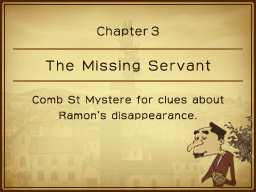 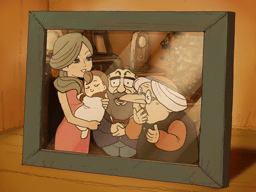 Hint Coins In:
#The Curtain Tie on the Right

Tap the Picture Frame on the right side of the screen. Layton says the picture is of Ingrid, Matthew, Baby Flora, and Dahlia. He decides to ask Lady Dahlia about it later.

Talk to Inspector Chelmey and he'll present Puzzle 029. Solving this puzzle rewards you with a

Talk to Lady Dahlia. Professor Layton asks her about the photo, but she says the woman pictured is someone else. Who could look so much like Lady Dahlia?

Talk to Matthew. He tells you about Baron Reinhold's first wife Violet, who looks exactly like Lady Dahlia. There is no relation between the two women; the Baron just happened to show up with Lady Dahlia one day. "Lady Dahlia" Mystery is added to your list of Mysteries.

Tap Claudia. She runs off, but leaves a pair of glasses behind. The glasses belonged to Simon! Professor Layton takes them to Inspector Chelmey. Chelmey's face shows his surprise at seeing the glasses, but he insists that the glasses must have fallen off of Simon's body during transport.

Chelmey tells Layton to stop meddling and sends him on his way. Head to the Manor Border.

Talk to Agnes to ask her about Ramon and trigger Puzzle 030. Solve this puzzle to get a

Talk to Marco to ask about Ramon. Talk to him again and he'll give you Puzzle 031 to solve. Solve this puzzle to get another

Stop at the General Store before moving on.

Tap on the Candy Jars to find Puzzle 032. A successful answer gets you another

Tap on the Candle for Puzzle 033. Solving this puzzle rewards you with a

Pine Bed. Give it to

Move on to the Plaza.

"Beyond the Clock Tower" appears in the Menu.

Talk to Percy to ask about Ramon. If you talk to him a second time he'll give you Puzzle 034 to solve. Percy's puzzle gets you another

Visit Town Hall and Granny R's House of Puzzles before moving on.

Leave Town Hall and Tap on the door to the House of Puzzles.

Hint Coins In:
#The Bucket

Tapping on the door to the House of Puzzles will trigger Puzzle 058. The door will open only after this puzzle is solved.

Inside, talk to Granny Riddleton to learn how the House of Puzzles works.

Head outside and move onto Park Road.

Upon entering Park Road, a loud noise shakes the screen. Pauly angrily complains about the increase of noise from the Tower. Why is the Tower making so much noise?

Crouton has lost one of his measuring cups again. Talk to him to help him solve his problem in Puzzle 024. Solving this puzzle rewards you with a

Return to the Plaza.

Professor Layton and Luke need to get through the Clock Tower, but Deke is blocking the way. Talk to him and he'll inform you that you need to have solved at least 12 puzzles to pass. No problem. However, you also have to solve Puzzle 035 to pass.

With the completion of this puzzle, the Clock Tower opens and two Journal Entries appear titled

"The North Side of St Mystere". You also receive yet another

Hint Coins In:
#The Brown Sign on the Left

Tap on the cat and mouse. Professor Layton will be reminded of Puzzle 036. Complete the puzzle to find a

Tap the sliver of doorway on the left to find Puzzle 107.

Talk to Lucy to find out about Ramon and get Puzzle 037. Lucy tells you to seek out Jarvis. She also rewards you with a

Hint Coins In:
#The Lamp by the Door

Talk to Zappone. He'll present Puzzle 038. Solving this puzzle gives you another

Talk to Agnes. After another dire prediction of your future, she'll ask you to solve Puzzle 039.

Hint Coins In:
#The Lamp by the Blue Door

Talk to Gerard. He is looking for a big coin that he lost. Despite his loss, he is still able to present Puzzle 041. Solving Gerard's puzzle rewards you with a

Hint Coins In:
#The Mold below Jarvis

Talk to Jarvis. He hasn't seen Ramon since yesterday, which is an unusual occurrence. Even more unusual, people have been continually vanishing after complaining of sickness or fatigue.

Sounds like a new Mystery! "Village Disappearances" is added to your list of Mysteries. A Journal Entry accompanies it, called

Jarvis refers you to Zappone for more information. Head left.

Hint Coins In:
#The Stack of Books on the Right

Talk to Archibald to trigger Puzzle 040.

Solving this puzzle rewards you with the last

gizmo! Go into the Gizmo section of The Professor's Trunk to put the gizmos together and find out what they make!

Tap the top of the large Column located behind the stalls to find Puzzle 101.

Head back to the Fork in the Road.

Talk to Zappone. He proves to be useless at providing any helpful information about Ramon, but he is able to direct you to the owner of the Restaurant, Crouton. A new Journal Entry appears, titled

Before heading to Park Road and the Restaurant, stop by the Northern Path.

Gerard is back with another Puzzle. Talk to him for Puzzle 042.

Head back to the Plaza. Deke will send you a friendly reminder to search the entirety of St. Mystere carefully to find all the puzzles. Take his advice and backtrack to the Clock Tower.

Lucy has returned. Talk to her for the final puzzle in Chapter 3, Puzzle 043. She will reward a successful answer with a

Blue Bed. Give it to

It's finally time to visit Crouton on Park Road. 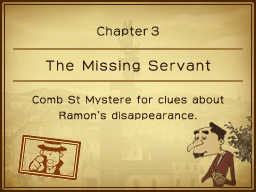 Crouton hasn't seen Ramon either. It seems that Ramon has a habit of skipping work and visiting the Restaurant, so his absence is cause for worry. Also frightening are the rumors circulating of a strange old man whose been kidnapping people. Crouton recommends that you visit the Cafe for more information. It's good timing, because sunset has just fallen and the Cafe is now open.