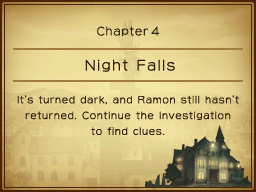 Along with the Start of Chapter 4 comes the Journal Entry

"Rumors at the Restaurant."

Hint Coins In:
#The Manhole

Talk to Adrea to trigger Puzzle 045. She will reward you with some cryptic information and a

Head to the Plaza.

Hint Coins In:
#The Chimney of the House on the Right

Talk to Gerard. He dropped his wristwatch by the park, and like a good gentleman, Layton offers to go find it. This adds a new Journal Entry,

Go to the Park Gate to help Gerard.

Hint Coins In:
#The Trash on the Right

Talk to Deke. He tells you that Beatrice has the watch at the inn. Before he lets you go, however, he asks you to solve Puzzle 046. You get a

Stuffed Bear for solving the puzzle! Give it to

"The Inn at Night" appears.

Travel through Park Road and the Plaza to reach the Entrance.

Hint Coins In:
#The Trashcan

Before you go in the Hotel, tap the Inn sign to trigger Puzzle 113.

Go into the Inn.

Talk to Beatrice. She hands over the

Wristwatch and lets slip that another guest has checked into the hotel. After extracting a promise from Beatrice to keep the Inn doors open late, the Journal Entry

Head back to the Plaza.

Gerard gives you a puzzle in return for his wristwatch. Solve Puzzle 047 to gain entrance to the Clock Tower and receive a

Cream Rug. Give the rug to

"To the Cafe" appears.

Head through the Clock Tower.

Hint Coins In:
#The Rock by the Blue Door

Tap on the Cat and Mouse pair to trigger Puzzle 048. Solve the puzzle to find a

Talk to Lucy and she'll present you with Puzzle 049. Solving the puzzle rewards you with some gossip and a

Bookcase. Give it to

Move North to the Fork in the Road.

Hint Coins In:
#The Dirt Spot below the Door

Talk to Marco. He warns you of the dangers of the night before presenting you with Puzzle 050. Marco gives you a

Teak Bureau for solving the puzzle. Give it to

Enter the cafe by tapping on the door.

Hint Coins In:
#The Seat of the Left Chair

Talk to Crumm. He's only willing to share his information to those who have solved 30 or more puzzles. When Crumm sees that you have solved the required amount, he tells you to go visit Prosciutto for more information. Following this conversation, the Journal Entry

"Talk of a Kidnapper" appears.

Before heading to Prosciutto's, talk to Zappone. He asks you to solve Puzzle 051. Solving the puzzle rewards you with a

Head outside and to the left to reach the Market.

Hint Coins In:
#The Pot on the Right

Talk to Agnes and she'll give you Puzzle 053 to solve. She gives you a

Television for solving the puzzle. Give it to

Talk to Giuseppe to trigger Puzzle 054. A successful answer rewards you with a

Head right to the Northern Hill.

Hint Coins In:
#The Steps

Pauly, angry as always, has another puzzle for you. Talk to him to trigger Puzzle 052. A

painting scrap is your reward for a successful answer.

Hint Coins In:
#The Mold on the Sidewalk

Grab some Hint Coins, then head through the Blue Door on the Left. 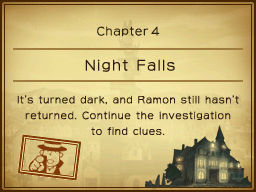 Hint Coins In:
#The Space Under the Doorside Table

Tap on the meat hanging above Prosciutto to trigger Puzzle 114.

Talk to Prosciutto to further the investigation. He tells you about a creepy old man he spied carrying a sack the other night.

Leave Prosciutto to his meat and move outside. This will trigger a cinema scene and the new mystery "Mysterious Rumbling" to investigate. Luke finds another cog, and Professor Layton suggests they take it to Lady Dahlia at the mansion.

Layton tries to organize a search party to find Ramon, but Inspector Chelmey opposes him. In the middle of their bickering, Matthew bursts in with shocking news; Ramon has returned! Layton agrees that he must have been mistaken and drops the argument. Following this conversation, the Journal Entry

Talk to Gordon to solve Puzzle 012.

Exit the mansion. Layton and Luke discuss their suspicions before retiring for the night. Layton adds "Ramon's Memory" to his list of mysteries.

Hint Coins In:
#The Light Switch

In the morning, Beatrice informs you that Inspector Chelmey called and requested your presence at the manor.

Talk to Beatrice and she'll ask you to solve Puzzle 055. Give a correct answer to receive a

Simple Chair. Give it to

Make your way outside.

Hint Coins In:
#The Chimney on the Right

Talk to Stachen before heading off to the Mansion. He will test you with Puzzle 056. If you solve it you will receive a

Desk! Give it to

Hint Coins In:
#The Chimney to the Left of the Clock Tower

Stop to chat with Deke. He asks with your advice on Puzzle 057. Help him out to get a

Pile of Books. Give it to

Go to the right to reach Manor Road.

Hint Coins In:
#The Brick Wall

painting scrap after you solve it.

Under Marco, there is a shiny object! Tap on it. It turns out to be a note written about Lady Violet's death.

Store the information away for later and move toward the mansion. Before pursuing this course of action, make a short trip to the General Store.

Hint Coins In:
#The Shelf Behind the Counter

Grab the hint coin, then head back to the Manor Border.

Hint Coins In:
#The Grass on the Lower Left

Grab the lone hint coin and move on.

Hint Coins In:
#The Bush to the Left of the House

Tapping on Claudia reminds Layton of a puzzle. Have Luke solve Puzzle 060 to get a

Hint Coins In:
#The Third Step

Hint Coins In:
#The Round Plate

As you enter the parlor, you see an odd scene between Matthew and Inspector Chelmey. Noticing you, Chelmey tells you not to interfere in his case and sends you downstairs. Look in your Journal to find the new entry

There are still things to do in the Parlor, so walk back up the stairs.

Talking to Gordon triggers Puzzle 061. He gives you a

Wall Clock in exchange for a correct answer. Give it to

Chelmey also has a puzzle for you. Talk to him to solve Puzzle 062. You will find a

Talk to Dahlia and she'll present Puzzle 063 for you to solve. She'll give you a

Splendid Painting as a reward for a correct answer! Give it to

Before leaving, talk to Gordon one more time. He's got another puzzle for you! Solve puzzle 103 and receive a

Mysterious Bottle as a reward. Give it to

Head to the Manor Border.

Talk to Ramon. He has been feeling great ever since his disappearance, and does not remember anything about his abduction. Layton and Luke discuss their thoughts on the case and Layton suggests they talk to Matthew to get more information.