Professor Layton and the Curious Village/Chapter 8: The Shadowy Intruder 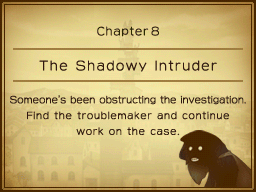 Chapter Goal: Someone's been obstructing the Investigation. Find the troublemaker and continue work on the case.

Along with the start of Chapter 8 comes the Journal Entry

Before stopping at the inn, make your way to the Sewer Dead End.

Talk to Sylvain and he'll share Puzzle 092 with you.

Now, head to the Inn

Talk to Beatrice and ask to see the most recent newspapers. Unfortunately, the newspapers from the inn are missing! Before you can contemplate this too thoroughly, Ramon comes to take you to the mansion at the Inspector's request.

You might as well see what Chelmey wants. Head toward the mansion.

When you step onto Manor Road, the mysterious girl stops you and warns you not to interfere with the tower. Before you can get more information from her, she disappears.

Keep heading to the manor.

Matthew welcomes you in the Manor Foyer but he seems unsettled. There is nothing you can do for him, so head upstairs. 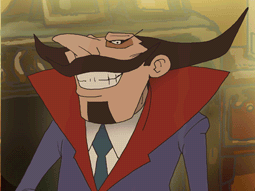 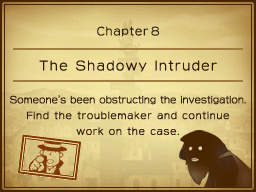 Unexpectedly, Chelmey accuses Professor Layton of murdering Simon! Layton decides to bring up his suspicions about Chelmey in retaliation.

After a cinema scene, Layton brings up the article regarding Inspector Chelmey. When he asks Luke to name the Inspector's favorite food, select the "Sweet-potato fritters" option.

The Inspector tries to explain himself, but ends up saying the wrong name for "his" wife. Layton's caught Inspector Chelmey in a lie!

The Professor goes on to point out the time of the Inspector's arrival. When Layton asks Luke when the drawbridge shut down, select the "During our search for Claudia" option. There was no way Chelmey could have entered the village, nor could Simon's body have been removed.

Odder still, Chelmey knew about the Tower Key, when Layton and Luke had not told a soul about their find. He must have been spying!

Chelmey finally cracks and reveals himself as Don Paolo! After some choice words, Don Paolo jumps out the window and disappears. Layton and Luke decide to pick up their investigation where they left off.

The Chelmey mystery is solved as Chapter 8 comes to an end!

Talk to Lady Dahlia. She's not feeling well and is having strange dreams. Let it go for now and head to Tower Road.

Talk to Martha. Take a moment to solve Puzzle 105 for her.

When you are finished, move north.

Layton finds a small indentation on the wall that matches the location of the X on Archibald's note. Layton inserts the Tower Key and the Dead End opens!

Chapter 9 begins, and the Key mystery is solved!