Professor Layton and the Last Specter/Puzzles 026-050

Caution! This page contains all the hints and solutions for every puzzle from 26 to 50. Scroll carefully or you might spoil the answer of a puzzle for yourself. The solutions are hidden behind spoiler tags, so only take a peek if you're desperate.

Description: "One day, I saw a spacecraft hanging motionless in the sky right above me. 'Must be engine trouble,' I thought. The solution was simple. All I had to do was move the spacecraft's energy ball from the left side to the right, and it was as good as new! Think you can do the same?"

Description: The floating cottages shown below are connected by 12 small bridges, which has made this little retirement community quite the tourist attraction. A visiting couple has decided to paddle a boat out to one of the cottages and walk back to the mainland by crossing each bridge only once. Which cottage should they start at?

Description: You want to display your impressive collection of black and white cat paperweights on this 4x4 grid. You must fill every space, and no row or column can have more than two same-colored cats next to each other. The six cats currently on the grid must remain where they are. How can you fill in the rest of the grid? Touch a space on the grid to place a cat, change its color, or remove it. 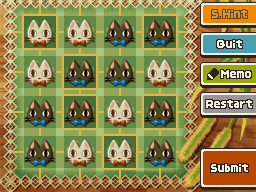 Arrange the paperweights according to the screenshot.

Description: A friend wrote you the following letter: "Our baby girl Nat was born last year in March. If you multiply her age by those of her older sister Kat and brother Pat, the product is 36. If you add all of their ages together, you'll get a sum of 13. Everyone is healthy and happy. Write back soon!" The letter was written on April 25th. What are the ages of Nat, Kat, and Pat?

Description: Someone left a ton of books on the table, and now these two librarians have the unpleasant task of shelving them all again. The librarians are trying to count all the books, but they're stacked so high that neither one can see them all. Using each librarian's point of view, work out how many books are on the table.

There are a total of 16 books.

The light is 4 feet above the floor.

Description: You have the job of cleaning a king's room in his palace. The king is quite meticulous and has declared that his room be cleaned in a very specific way. There are numbers written on the floor tiles that show the order in which the tiles should be cleaned. Starting from tile 1 and proceeding from tile to tile in the correct order, can you find a way to clean all of the tiles without repeating any? To avoid dirtying the newly-cleaned floor, the last tile you clean must be next to the door. 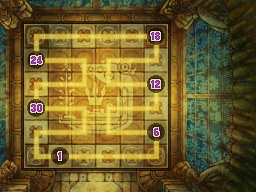 Move according to the specified path in the screenshot.

Description: Four friends met in town, each with a kind of fruit to share. The first friend bought a bunch of bananas; the second bought a cluster of grapes. They set the fruit down at their feet as the third and fourth friends arrived, bringing with them a grapefruit and a melon. They also laid their foot at their feet but then had to run off as fast as possible. Where did the group meet? Circle your answer on the map.

Location B. The grapefruit and melon rolled down the slope, forcing both friends to chase after it.

Description: You ordered candies in the shape of hearts, clubs, diamonds, and spades. But when the candies arrived, you noticed you received the wrong amounts. The seller claims she sent the correct number of each type, and looking again, you realize she's actually right. How many of each candy did you originally order?

Name: How Many Ones?
Trigger: Talk to Tweeds
Location: Market Center
Chapter: 4
Picarats: 40

Description: One day, a little boy who was very curious about numbers thought to himself: "If I were to write out all the numbers from 1 to 120, how many times would I write the numeral 1?" Can you work out the answer?

Description: Seven gold coins make up a circle. Moving only one coin, arrange them so there are an equal number of heads-up coins as there are tails-up coins. Use the stylus to move just one coin. Tap a coin to flip it over. Think you can make heads or tails of the given situation?

Description: This clever toy is actually a double-sided maze. Every time the ball drops through a hole, the board will flip over. Do you think you can make it to the goal?

Go right, down and left to go down the first hole. Then, go right, up and left and go down the leftmost hole you can reach. After that, go up and right into the next hole, then move toward the only hole available on the opposite side. Go into the hole below you at the other end, then move straight right to the next hole. Next, slide into the lower hole you can see, and do the same to enter the next hole in the opposite side. Once you emerge, just slide to the star to finish!

Description: You are tasked with filling a reservoir by pumping water from a nearby lake using these four pumps. If you filled the reservoir using only one pump at a time, pump A would take three days, pump B would take 6 days, pump C would take 10 days, and pump D would take 15 days. You decide to get one extra pump to make your life easier. Which pump should you buy another of in order to get the job done in exactly one day? 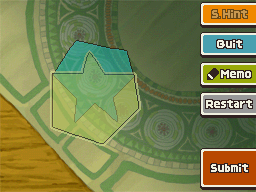 Description: Have you noticed that throughout the 24 hours of the day, there are special times, like 1:11, at which the same digit appears three times in a row? If you take these special times and measure the angle going clockwise from hour hand to minute hand, excluding angles where 12 lies between the two hands, which time has the greatest angle? Obviously, the angle between the hands in times like 00:01 and 00:09 is tiny, so you can ignore those from the start.

Description: Somebody threw on this suit of armor in the exact same attire they're wearing now and put a dent in the helmet! All you need is a close look at the perpetrator to find out who it was. Which of these four lads was it?

Person D. He is using his hand to hide his head wound.

Description: These portraits show five generations of the same family. Each generation shares only one particular facial feature with the next generation. The portrait above the Roman numeral I is the first in the series. Put the remaining portraits into chronological order.

Description: This café's sign has been turned around. The sign is made up of nine panels. When one panel is turned over, the adjacent panels turn over with it. Touch the panels to turn them all around and display the sign correctly!

Touch the center panel, then touch all of the four corner panels.

Description: The garden at Barde Manor has grown so thick that it's nearly impassable! Fortunately, a sign tells you how to navigate your way through it. It reads: "Walk on every square of the garden only once, going in numerical order, from 1 to 8." Can you get to the goal from one of the starting points? 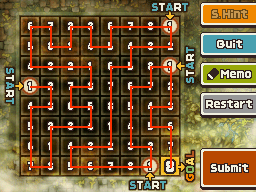 Take the path indicated in the image.

Description: To open the lock on this door, you must enter the correct numbers. To the right of the doorknob is a set of equations. Each symbol represents a unique single-digit number. If you solve the equations, you'll determine which symbol represents which number...and you'll have your key! Touch the numbers to change them.

Threads 2 and 4. The spider moves away from the center, taking a turn whenever it hits a junction.

Description: A priceless painting is held securely in a locked display case at an art gallery. According to the guard, the painting contains a clue to which of the four keys opens the case. So which key--A, B, C, or D--opens the display case?

Key C. The dents on the key correspond to the shape of the girl's face and flowers.

Description: You have a 52-card deck with no jokers. It the cards are all placed in a certain order that follows the pattern below, what will the number and suit of the 26th card be?

Jack of Clubs. The suit changes in a set order per card, while two numbers are skipped from each card.