Professor Layton and the Last Specter/Puzzles 051-075

Caution! This page contains all the hints and solutions for every puzzle from 51 to 75. Scroll carefully or you might spoil the answer of a puzzle for yourself. The solutions are hidden behind spoiler tags, so only take a peek if you're desperate.

Description: A couple and their three children need to cross this river by raft. The raft can hold up to two people--one person to row and one passenger. Rowing is hard work, however. Both adults can row across twice, but they need to stop for a rest between the two trips. The children can only row across the river one time. Can you help get everyone in the family to the other side?

Name: What Am I?
Trigger: Talk to Scraps
Location: Market West
Chapter: 5
Picarats: 20

Description: Who needs batteries or silly old springs? I have no want for those kinds of things. My top is my bottom, my bottom my top. If you knock me over, I surely will stop. Awake me from sleep with a soft touch. I'll never be late...at least, not by much. Can you guess what I am? Circle me!

Answer
The object is the hourglass.

Description: Here is a bookshelf crammed with thick, heavy encyclopedias arranged as shown. All the books have the same depth, and they fit perfectly onto the shelf. There is one book that nobody ever takes from the shelf first, no matter who is browsing the shelf. Touch which book that is.

Description: "I found an old bag while I was doing a spot of spring cleaning. What do you think was inside? See if you can create the mystery item using the three different pieces forming a bag shape below. Oh, and put the finished article on the table next to where the bag was." 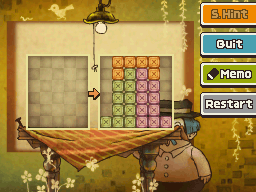 Arrange the pieces to create Layton's hat as shown in the picture.

Description: "There was a tall silk hat inside the old bag. It's a bit too large to keep around, though... Is there any way you could make it smaller? You're not allowed to let pieces overlap, of course." 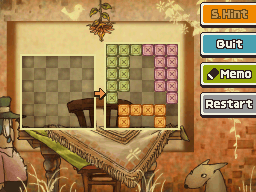 Form a top hat with the space between the pieces as shown.

Description: A young man tells his local florist about three games he intends to play by picking petals off of flowers one at a time. He'll start with "She loves me, she loves me not" and move on to "happy, unhappy, so-so." With the final flower, he'll choose whether to buy his sweetheart "A bouquet, a cake, a ring or a book." The florist decides to pick out a bouquet that he thinks will give the best answer on the last petal of each flower. Which bunch does the young man walk away with?

Answer
Bouquet D will give the best outcome.

Description: A route map is posted at the bus stop. The route of each bus can be worked out by following the lines of the grid according to the following rules:
1. Buses only move toward their destination and never turn back.
2. A bus turns whenever it has the option to do so.
Someone rubbed out two vertical lines on the map, so some bus routes are now wrong. Add the two lines back in to correct the map. Draw the lines from an intersection on the map.

Description: The forecast is predicting rain. This girl needs help choosing the perfect umbrella so she can weather the storm. She wants one with a blue handle, a red rim, and a pattern of circular rings. Which of the four umbrellas meets her requirements? Choose from A, B, C, or D.

Answer
Umbrella A is the right umbrella.

Description: Oh no! You somehow got left behind on a museum tour. Where did everyone go? From a distant room, you can hear the tour guide describing an exhibit. "What you're looking at now has come here from farther away than any exhibit in the museum. It's not man made, and it's quite hard to find, but you do occasionally find them dotted here and there on Earth." Any idea which room they are in? Circle the tour group's location.

Answer
The group is in the space exhibit in the top-right corner of the museum. The tour guide is describing the meteorite on display.

Answer
The dinosaur has 326 bones. The number is given inverted at the ribcage.

Answer
File 29 is the file you need.

Description: "One of these girls is my best friend. She has blonde hair, doesn't wear glasses, and has a mole under her right eye." Can you tell who it is?

Description: "Hey, Dad! I finished making the LONDON one that you asked for." "Thanks, son. It looks great, but...you got one letter wrong." "What?! No way! That's... Oh. I guess I did. I'll fix it right away!" So which letter did the son get wrong? Circle the incorrect letter.

Answer
The letter L is incorrect.

Description: "I suppose I could share this triangular cake. It's really tasty, but I can spare half of it, and my friends can divide that between them. Then again, it is my cake. It's only fair that I should have most of it... I'll just cut two pieces with a ratio of 4:5 and take the bigger piece. That's still pretty generous, isn't it?" The sides of the cake are 15 in. long. How far along the side should he cut?

Answer
Option C. You should cut at the 10 inch point to divide it into the correct ratio.

Description: Eureka! You've discovered priceless treasure at the bottom of the dig site. Unfortunately, it's buried under a ton of rubble. Move the rubble out of the way so that you can get your hands on that treasure.

Answer
Move the right cyan block all the way up to the top. Then, move the purple block to the top-right corner, and the green block snugly to the left of the purple block. Move both of the lower blocks to the bottom-right corner, and move the dark blue block all the way down and right. Wiggle the treasure up to the left of the upper green block, and move the dark blue block into the treasure's original position. Move the two remaining blocks in the second lowest level all the way left. Finally, move the last three blocks in your way to the second lowest level and move the treasure out to solve the puzzle in 14 moves!

Description: An archeologist shows you some ancient runes found on a dig in Misthallery. "These runes were divided into two groups, but I seem to have mixed them up." Can you sort the runes into the correct groups? Only the top-left rune cannot be moved. 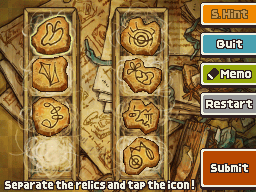 Arrange the runes as shown in the screenshot. Runes to the left have symbols that can be traced in one stroke, while runes on the right does not.

Description: Two signs decorate the entrance to this unique hotel. One sign has a mirrored surface with several lines drawn across it. It also reflects the lines drawn on the sign directly opposite. When both sets of lines are combined, they form a three-digit number that states the price of the deluxe suite. How much would a night in the deluxe suite run you?

Answer
A night in the suite costs you 546.

Description: A sweet little kitty cat has gotten herself trapped in a maze, and it's up to you to rescue her! She won't come when called, so you have to coax her out with some very fresh fish. She's so hungry that she'll head toward any fish she spots in her direct line of sight and eat it before looking around for the next fish. Lead this trapped kitty to the goal using only six fish.

Description: Can you work out the height of this lamppost just by looking at its shadow? The post next to the light has a height of 1 meter and casts a shadow 1.5 meters long.

Answer
The lamppost is 4 meters tall.

Description: "A, B, and C live in a row of houses that runs west to east. Their roofs are colored red, blue, and yellow. Unfortunately, I forgot who lives where, but I remember a few details.

Put the houses and roofs in the correct positions."

Answer
From west to east: House C with blue roof, house A with yellow roof, and house B with red roof.

Description: The water in the park fountain is fed through 13 valves. One day, A and B are cleaning the fountain and come up with the following game: Taking turns to open one valve or two adjacent valves at a time, whoever opens the final spout will be the winner. After the coin toss, A starts and opens two valves. Can you help B win the game?

Answer
As the hints state, the starting valve must be valve 8 to divide the fountain into two sides of five valves. After that, you must simply mirror A's actions on the opposite side. As A does not have a set pattern for opening valves, a step-by-step strategy cannot be provided.

Description: Here are 16 people standing in four rows of four. By moving only two caps, find a way to create a checkerboard pattern of people with and without visible brown hair. Of course, to meet this requirement, each row and column must contain an equal number of people with brown hair and without brown hair. 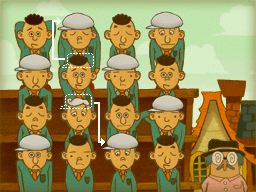 Swap two hats to make the formation in the image.

Description: The hotel owner, Joseph, has challenged the professor to a little game. There are 15 empty bottles on the counter. The players take turns removing one, two, or three bottles at a time. Whoever takes the last bottle loses the game. Layton is going first. Can you help him win?

Answer
Since the computer doesn't follow a set pattern, the number of bottles you remove each turn will not be explained. Follow the Super Hint and leave 13 bottles the first turn, 9 bottles the second turn, 5 bottles the third and 1 bottle the fourth.

Description: Even a fabulous chandelier isn't going to be much use in a blackout. Let's say you need to light a room during a blackout using only seven lamps. Each lamp will light the square it's on and one square on each side of it. How would you place seven lamps to light this entire room? 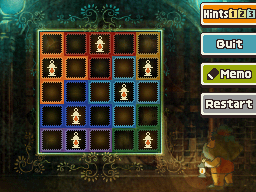 Place the lamps according to the picture.

Description: On a square piece of wood with 20 cm sides, a mysterious fellow has painted an interesting design using a brush that is 10 cm wide. This painter used only one type of paint, but it's quite magical. It starts off pink, as shown in example 1. If the pink is painted over, it turns orange as shown in example 2, and if the orange is painted over, it turns brown as in example 3. With that in mind, how many brushstrokes did it take to paint this design?