Professor Layton and the Last Specter/Puzzles 126-156

Caution! This page contains all the hints and solutions for every puzzle from 126 to 156. Scroll carefully or you might spoil the answer of a puzzle for yourself. The solutions are hidden behind spoiler tags, so only take a peek if you're desperate. 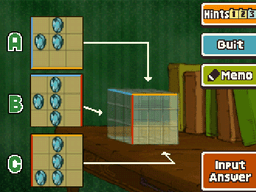 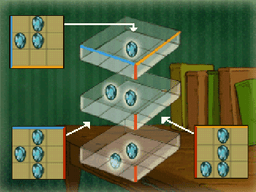 There are 5 total gems. 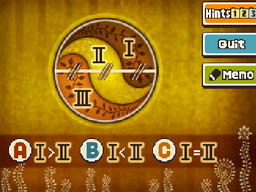 Description: The diameter of the circle below is divided into three equal lengths, and those lengths are used to make the marble-like design that splits the circle into three different-colored sections.

The areas of sections I and III are equal, but what about the area of section II? Is it less than, greater than, or equal to the area of I? 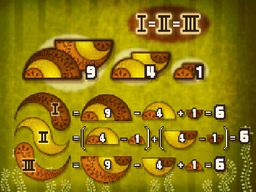 The answer is C, they are equal. 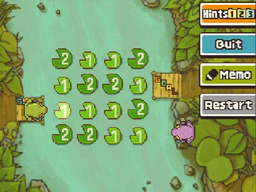 Description: The green frog is trying to make his way to his purple girlfrog. The only way to get to her is by leaping across the lily pads floating in the river. The frog can go horizontally or vertically, but once he leaps, he cannot change directions, and he will leap the number of spaces that is on the lily pad he is jumping from. To impress his girlfrog, he must laso land on every lily pad before reaching her. What are you waiting for? Hop to it! 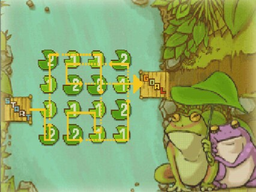 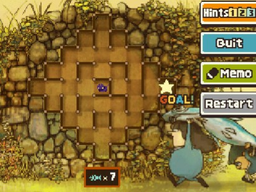 Description: A cat has gotten stuck and needs to be rescued. She won't come when called, so you will have to coax her out with some fish. She's so hungry, she will head toward any fish she spots in her direct line of sight and eat it before looking around for the next fish. Get the cat to the star using only seven fish. 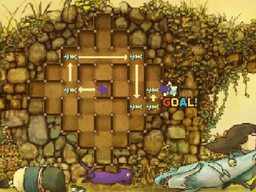 Place the fishes according to the screenshot. 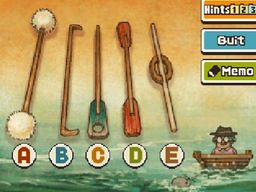 Description: A weary old sailor is describing a special tool he uses when he's out in his boat: "Sometimes when I'm out in my boat on a fine, warm day, I get tired. So I dig out a special tool, and suddenly I don't have to lift a finger to move my boat. You might think it's unfair, but nobody minds helping out an old man like me." What tool is he talking about? 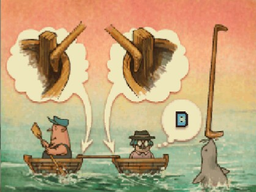 The answer is B. 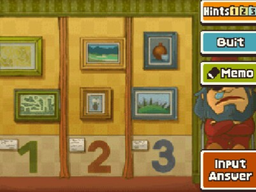 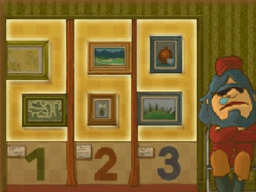 The answer is 9 million dollars. 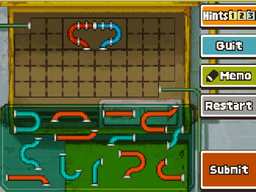 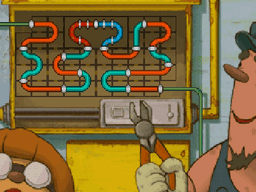 Arrange the cables based on the screenshot. 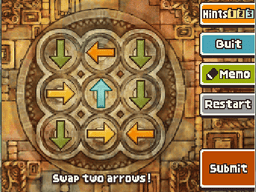 Name: One Way
Trigger: Repeatedly tap the upper part of the sediment in the middle
Location: Descending Path
Chapter: 7
Picarats: 30

Description: This board consists of nine panels with arrows on them. By swapping just two of the arrows, you may enter the board via an arrow, follow the directions around the whole board, and exit the board with the final arrow. Which arrows should you swap? 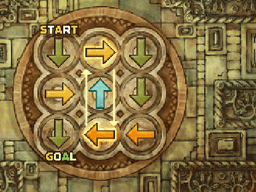 Swap the top and bottom arrows in the center.
Retrieved from "https://strategywiki.org/w/index.php?title=Professor_Layton_and_the_Last_Specter/Puzzles_126-156&oldid=962939"
Hidden category: