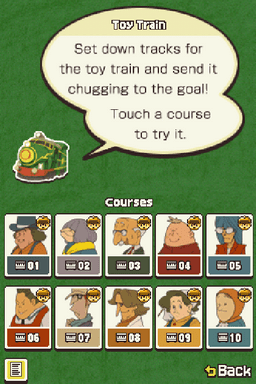 The Toy Train is one of the minigames which can be played once you have talked to Bucky in Chapter 2. A starter track by Bucky will be automatically given once the Train is received.

The goal of the Toy Train minigame is to drag and draw tracks from the starting point to the end while passing through all stations. The two types of stations can be passed either horizontally (stations facing front) or vertically (stations with a vertical bar at the side). There are also obstacles like trees, rocks, houses, and cars. Out of the four, the car moves through its own course which the player has to look out to as well.

Upon completion of all 10 Toy Train courses, The Boatman's House will be unlocked in Layton's Challenges.