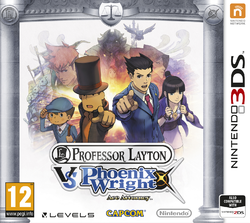 Professor Layton vs. Phoenix Wright: Ace Attorney (レイトン教授VS逆転裁判, Reiton-kyōju vs Gyakuten Saiban?, lit. Professor Layton vs. Turnabout Trial) is a crossover adventure puzzle game joint-developed by Level-5 and Capcom and published by Level-5 for the Nintendo 3DS. The game is a crossover between Level-5's Professor Layton puzzle series and Capcom's Ace Attorney adventure series, combining gameplay elements from both series. The game features scenario designs from Shu Takumi, the creator of the Ace Attorney series. The game was released in Japan on November 29, 2012, March 28, 2014 in Europe, March 29, 2014 in Australia, and August 29, 2014 in North America.

In the city of London, a young girl named Espella Cantabella is chased after by a mysterious force and seeks the aid of the famous archaeologist and puzzle-solver Professor Hershel Layton, and his assistant, Luke Triton. When Espella is suddenly captured, Layton's investigation leads him to a strange book which transports him and Luke to a strange medieval city known as Labyrinthia. This town is allegedly home to witches who hide in the shadows, and is controlled by someone called the Storyteller, who has the power to turn anything he writes into reality. Meanwhile, Phoenix Wright and his assistant, Maya Fey, who have traveled to London as part of a lawyer exchange program, encounter the same book and are also transported to Labyrinthia. There, they discover Espella has been accused of being a witch and is to be put on trial. As Phoenix decides to defend Espella, soon discovering that the laws of this world are far different from his own, Layton seeks to solve the mystery behind Labyrinthia, with the two not always seeing eye to eye.